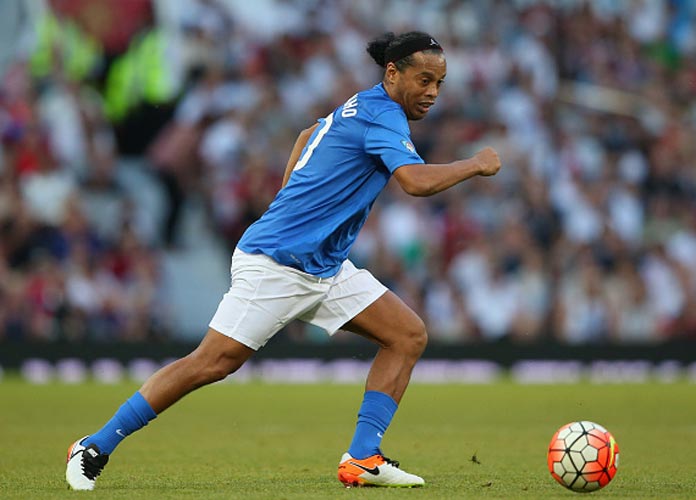 MANCHESTER, ENGLAND - JUNE 05: Ronaldinho of Rest of the World in action during the Soccer Aid 2016 match in aid of UNICEF at Old Trafford on June 5, 2016 in Manchester, England.

Brazilian football legend Ronaldinho and former Argentina international Juan Roman Riquelme are reportedly willing to come out of retirement in order to help Chapecoense, the Brazilian soccer team who lost several members in a fatal plane crash in Colombia on Monday night.

In total, 71 people–including players and coaching staff– died in the crash, and only three players survived. Gestures of solidarity and relief efforts have come in all forms across the globe: teams like Barcelona and the Cleveland Cavaliers have held a minute of silence before their games or practices, and Paris Saint-Germain as well as Real Madrid star Cristiano Ronaldo have donated millions to the families.

Now, Ronaldinho, 36, and Riquelme, 38, are saying they are prepared to sign with the club as players and help them out during this time of great need.

Ronaldinho is currently without a club after being released by Rio-based Brazlian club Fluminense in September 2015, while Riquelme simply retired two years ago.

Ronaldinho’s agent and brother, Roberto Assis, confirmed that the former Brazil international is ready to help out the club in any way possible.

“It is a very difficult time,” Assis told Globo Esporte. “Later on, if there is a contact, we can talk. I can only say that we are here and we want to help.”

Ronaldinho was particularly affected by the death of Chapecoense right-back Matheus Bibeco, a family friend who, like Ronaldinho, also started his career at his home club Gremio.

He posted a photograph of a game he played against Matheus with a message on his Instagram account: “Go in peace Matheus! My condolences to your family! I wish them all the strength and peace going forward.”

Ronaldinho, a two-time FIFA World Player of the Year, played for Paris-Saint Germain and AC Milan, and won the World Cup with Brazil in 2002. He also won a Champions League with Barcelona in the 2005-2006 season.

“Ronaldinho’s name was mentioned because he’s loved and without a club,” Assis said.

“He fits the profile and can be the right guy. But at the moment, we want to help families and it wouldn’t be right to create expectations for now.

“As Brazilians, we feel involved. We are together.”

MANCHESTER, ENGLAND – JUNE 05: Ronaldinho of Rest of the World in action during the Soccer Aid 2016 match in aid of UNICEF at Old Trafford on June 5, 2016 in Manchester, England. (Photo by Alex Livesey/Getty Images)