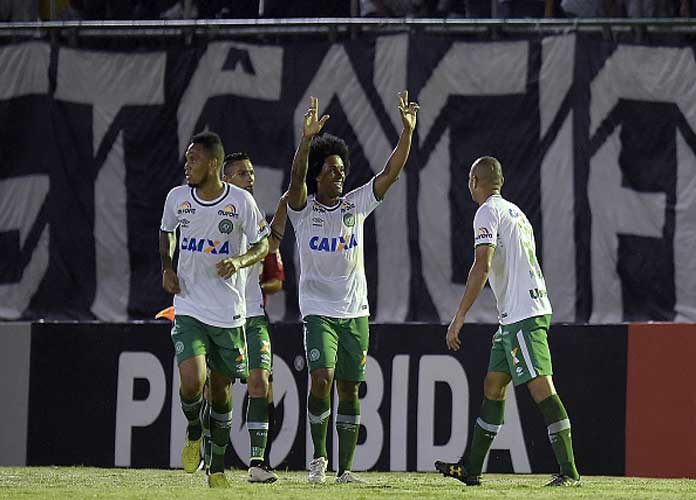 RIO DE JANEIRO, BRAZIL - NOVEMBER 16: Kempes (C) of Chapecoense celebrates a scored goal during the match between Botafogo and Chapecoense as part of Brasileirao Series A 2016 at Luso Brasileiro stadium on November 16, 2016 in Rio de Janeiro, Brazil. (Photo by Alexandre Loureiro/Getty Images)

The pilot of the plane carrying members of Brazilian soccer team Chapecoense that crashed in the Colombian mountains on Monday night pleaded to make an immediate landing because the aircraft was out of fuel, according to a recording leaked to Colombian news outlets on Wednesday.

The audio shows the final minutes of the doomed flight, in which the pilot is heard frantically requesting permission from the air traffic tower to land immediately. A controller explained another plane had been diverted with mechanical problems and had priority; the controller then instructed the pilot to wait seven minutes.

As the plane circled, the pilot became impatient after waiting several minutes for further instructions. “Complete electrical failure, without fuel,” he said just moments before the jet finally crash-landed in a mountainous region on the outskirts of Medellin, Colombia.

Just before the recording went silent, the pilot stated he was flying at 9,000 feet, and made his final landing request. “Vectors, señorita. Landing vectors.” This audio, along with the lack of an explosion upon impact, point to a rare case of fuel running out as a cause of the crash of the plane, which experts say was flying at its maximum range.

Only six of the 77 passengers survived: three players, two crew members, and a journalist. The plane’s fuselage, engines and tail were all torn apart due to the crash. Chapecoense, a rising Brazilian soccer club, was headed to Colombia to play in the finals of the Copa Sudamericana, one of South America’s biggest soccer tournaments.

At least 21 journalists were reported to be on the flight as well.

Dr. Ana Gonzalez, the medical director at Clinica Somer, the hospital outside Medellin where three of the survivors were being treated, said two of them, both crew members, were in stable condition.

Alan Ruschel, a defender for Chapecoense, was in critical condition, she added. Mr. Ruschel spent time before the flight posting selfies on social media networks with his teammates.

“Alan is the patient with the most serious injuries,” Dr. González said. “It is too soon to tell if he will be able to walk again, but we hope that in the future he will.”

RIO DE JANEIRO, BRAZIL – NOVEMBER 16: Kempes (C) of Chapecoense celebrates a scored goal during the match between Botafogo and Chapecoense as part of Brasileirao Series A 2016 at Luso Brasileiro stadium on November 16, 2016 in Rio de Janeiro, Brazil. (Photo by Alexandre Loureiro/Getty Images)