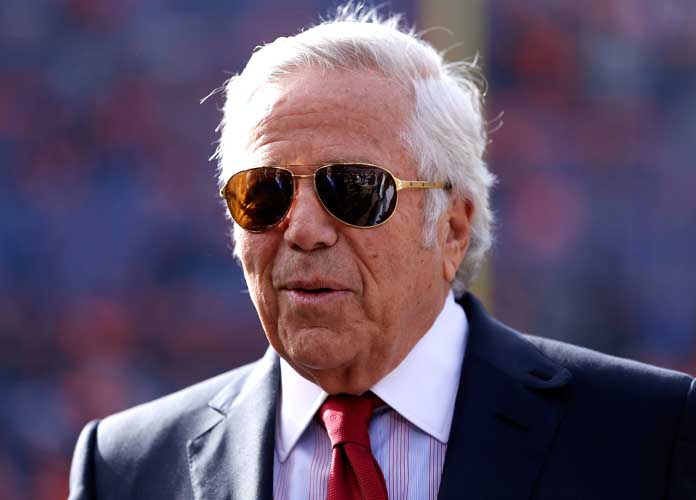 The six-time Super Bowl champion 77 year old was one of 25 individuals charged on Friday following the raid. Police had planned the sting operation for months. Jupiter, Florida, police said the investigation had gone from as far as China to the Southeastern Florida town.

Kraft will face misdemeanor charges on two counts of solicitation at the Orchards of Asia Day Spa. The Massachusetts native was not charged with human trafficking.

Kraft is know as friend and financial backer of President Donald Trump.

Jupiter Detective Andrew Sharp claimed Kraft seemed like a regular at the spa. “I would say going through the evidence, yes,” he said. Investigators also claimed that there was video of Kraft inside.

Investigators claim Kraft was a regular visitor to the Orchid Spa and that there is video of Bob Kraft inside the “spa.” @CBSMiami

The multi-billionaire payed market rate for his time at the spa. For $59 he was given a half hour inside and for an extra $20 he could spend an hour.

Kraft was one of 25 people charged in the case. The rate was $59 for a half hour inside the massage parlor and $79 for an hour.
Kraft is estimated to be worth $6.6 Billion. @CBSMiami

“We’re as equally stunned as everybody else,” Jupiter Police Chief Daniel Kerr said. An arrest warrant was soon issued for Kraft. He had last arrived at the club driven by his chauffeur.

Jupiter police chief said he was “stunned” and that an “an active arrest warrant” has been issued for Kraft.
Another detail: Kraft had his chauffeur drive him to the massage parlor. @CBSMiami

Kraft can most likely expect to participate in a pre-trial diversion program where the defendant attends a class on the hazards of prostitution. After such a class, charges are usually dropped.

Spokesperson for Kraft denied that he did anything illegal.  “We categorically deny that Mr. Kraft engaged in any illegal activity. Because it is a judicial matter, we will not be commenting further,” his lawyer said.

Statement from Kraft spokesman: “We categorically deny that Mr. Kraft engaged in any illegal activity. Because it is a judicial matter, we will not be commenting further.” @CBSMiami