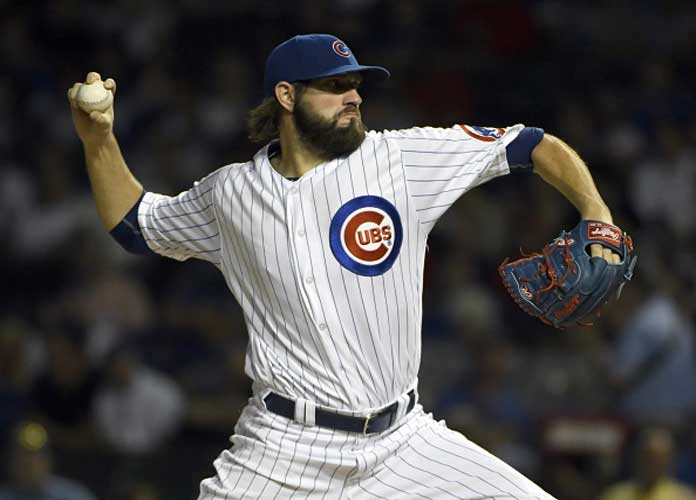 CHICAGO, IL - SEPTEMBER 19: Jason Hammel #39 of the Chicago Cubs throws against the Cincinnati Reds during the first inning on September 19, 2016 at Wrigley Field in Chicago, Illinois. (Photo by David Banks/Getty Images)

Free-agent pitcher Jason Hammel and the Kansas City Royals agreed on a $16 million, two-year deal on Sunday, and the contract comes with an option for a third year.

The option is a mutual one, according to FOX Sports’ Ken Rosenthal. Jeff Passan of Yahoo Sports reported the deal, pending a physical would pay the 34-year-old Hammel $8 million per year.

Sources: Jason Hammel has a two-year deal with the Royals. Guarantees him $16M. @Ken_Rosenthal had deal first.

All offseason, Royals officials have said the team’s payroll would not exceed the franchise-record of more than $140 million in 2016.

Hammel went 15-10 with a 3.83 ERA and recorded 144 strikeouts in 30 starts with the reigning World Series champion Chicago Cubs last season. The right-hander did not pitch in the postseason. The Cubs declined Hammel’s $12 million option for 2017, which made him one of the best starters on the free-agent market.

The Cubs acquired lefty Mike Montgomery in a trade with Seattle last July, and he could replace Hammel in the rotation.

In two seasons with Chicago, Hammel went 33-2 with a 3.59 ERA in 78 starts. The righty first signed with the Cubs in February 2014 and went 8-5 with a 2.98 ERA in 17 starts that season. He was then traded to Oakland in the deal that brought shortstop Addison Russell to Chicago. Hammel then re-signed with the Cubs the following December for $20 million for the 2015 and 2016 seasons.

Newly signed pitcher Brett Anderson, who signed a minor league deal with the Cubs earlier this offseason, could also play a greater role in the team’s rotation.

CHICAGO, IL – SEPTEMBER 19: Jason Hammel #39 of the Chicago Cubs throws against the Cincinnati Reds during the first inning on September 19, 2016 at Wrigley Field in Chicago, Illinois. (Photo by David Banks/Getty Images)