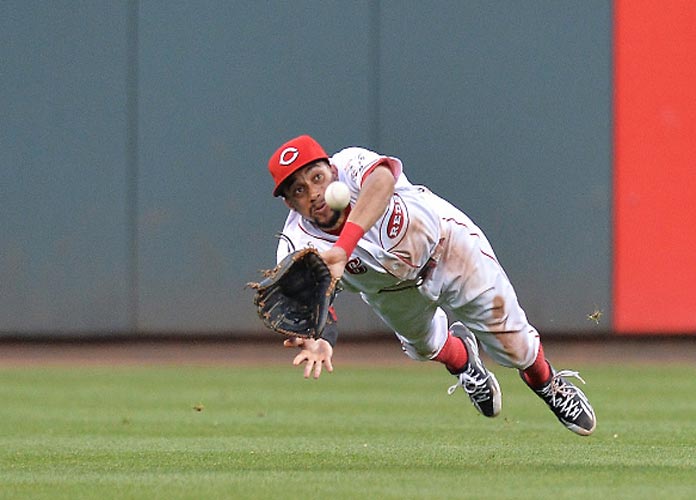 Billy Hamilton showed off both his speed and his catching skills by making a spectacular diving grab in the Reds’ 3-0 victory over the Texas Rangers at Great American Ball Park in Cincinnati Tuesday night.

Leading off the sixth inning, Rangers outfielder Carlos Beltran drove a 1-0 fastball deep into the left-center gap. According to Statcast, Hamilton traveled 123 feet and made a full-extension diving catch on the warning track to rob Beltran of extra bases.

Hamilton leads all National League center fielders this season with an 11.6 ultimate zone rating and an impressive 12 defensive runs saved.

“That’s a long way, too, to be honest with you,” Hamilton said. “That was fun. Like I said, especially coming out of a day where you ain’t getting no hits and you make one of those plays, it’s a day saver. Now I’m going home happy, going to have a good night of sleep and not have to put as much pressure on myself tonight.”

The Rangers have now lost three straight, but remain 5 1/2 games ahead of the Mariners, who lost to the Yankees 5-1, for first place in the American League West.

The Reds, who have won six of their last eight games, are 22-14 since the All-Star break– second-best in the National League– and Straily is part of the reason for their success. He is now 6-0 with a 1.98 ERA in eight starts since the break, and Cincinnati has won all eight.

“I have a pretty good history with a lot of those guys,” said Straily, a former Athletics and Astros pitcher. “Sometimes, when you have enough history with people, you want to make sure you’re not doing the same thing repeatedly over and over. We had backup plans if they started to hit certain pitches. We never really had to go to those. Tucker [Barnhart, catcher] did a great job. We were in synch the whole night.”

Rangers left-hander Derek Holland, who made his first start since June 20, came off the disabled list and allowed just one run in six innings. He gave up four hits, walked one and struck out five on 73 pitches.

The game was still scoreless in the sixth when Holland walked Tyler Holt to lead off the inning. Hamilton bunted him to second and Joey Votto brought him home with a single to right.

Rangers pitchers walked three and all ended up scoring. Tucker Barnhart doubled home a run in the seventh and Votto had another RBI with a sacrifice fly in the eighth.

After Holt drew a leadoff walk in the sixth, Hamilton tried to catch the Rangers’ defense off-guard with a bunt. It was fielded by Mitch Moreland, who threw to Rougned Odor covering first base. Initially, Hamilton was ruled safe, but after a Rangers challenge, the call was overturned. Hamilton was credited with a sacrifice bunt.

The two teams will face off for their two-game series finale in Cincinnati on Wednesday night. Right-hander Yu Darvish will start for the Rangers (73-53). Darvish is 7-2 with a 1.90 ERA in 11 career starts in Interleague Play. That’s the third-lowest Interleague ERA among pitchers with at least 10 starts.

Rookie righty Tim Adleman will take the mound for the Reds (54-71, 5th in NL Central). In his last start, Adleman allowed five hits over five scoreless innings on Friday against the Dodgers.