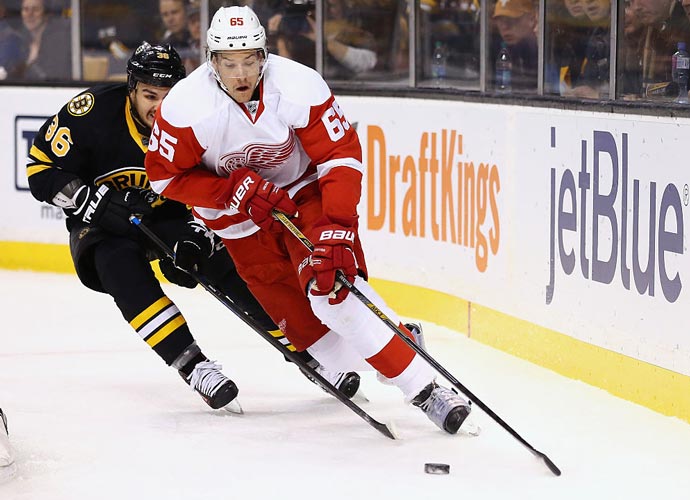 Caption:BOSTON, MA - NOVEMBER 14: Danny DeKeyser #65 of the Detroit Red Wings skates against the Boston Bruins during the first period at TD Garden on November 14, 2015 in Boston, Massachusetts. (Photo by Maddie Meyer/Getty Images)

The Detroit Red Wings secured what is undoubtedly one of their greatest victories of the season on Thursday night following their 3-2 overtime on-the-road win over the Arizona Coyotes.

Oliver Ekman-Larsson and Shane Doan  netted the game’s first two goals for the Coyotes in the second period, but the Red Wings quickly took advantage following penalties to Antoine Vermette and Anthony Duclair. With Vermette in the penalty box for hooking Brendan Smith, Pavel Datsyuk scored through a Justin Abdelkader screen at 11:50 in the third period to cut the Arizona lead to 2-1.

Then, Gustav Nyqvist dove after a rebound shot that Arizona goalie Louis Domingue blocked, and pushed the puck into the back of the net from the crease at 14:20 in the third to tie the game. This was Nyqvist’s 13th goal of the season, but his first in 11 games.

Finally, Danny DeKeyser scored the game winner at 2:08 in OT.  Detroit goalie Petr Mrazek had 27 saves, while Arizona’s Domingue had 22 saves. The Red Wings (23-14-7) will next host the Philadelphia Flyers on Sunday night, while the Coyotes (22-16-5) will host the New Jersey Devils on Saturday.

BOSTON, MA – NOVEMBER 14: Danny DeKeyser #65 of the Detroit Red Wings skates against the Boston Bruins during the first period at TD Garden on November 14, 2015 in Boston, Massachusetts. (Photo by Maddie Meyer/Getty Images)