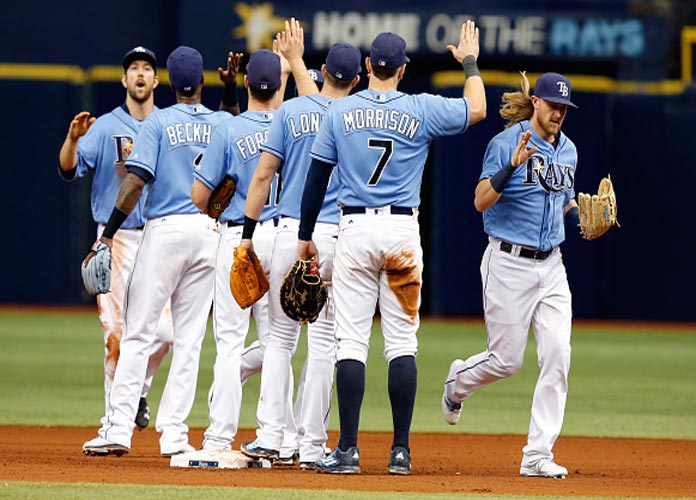 ST. PETERSBURG, FL - JUNE 12: Members of the Tampa Bay Rays celebrate a win over the Houston Astros in a game at Tropicana Field on June 12, 2016 in St. Petersburg, Florida. (Photo by Mike Carlson/Getty Images)

Following the horrific shooting at gay nightclub Pulse in Orlando on Saturday night, three MLB teams have decided to dedicate their annual pride nights to the victims of the attack.

The Tampa Bay Rays announced Tuesday that their annual Pride Night event, set for this Friday’s home game against the San Francisco Giants, will be used to remember and support the victims of the shooting that killed 49 people and injured 53 more to set the record for the deadliest mass shooting in US history. The team announced that all remaining tickets will be sold for $5 and all proceeds will go to the Pulse Victims Fund. Friday’s Pride Night will mark the 10th consecutive year the Rays have featured the event on their schedule.

Both Friday and Saturday, the not-for-profit blood collection organization OneBlood will set up blood drives outside the Rays’ Stadium, Tropicana Field. The team will also be handing out “WE ARE ORLAND” shirts to all fans attending the games. The Rays and Giants, who will conclude their three-game series on Sunday, will observe a moment of silence before the opening pitch, which is set to be thrown out at 7:10 pm by Billy Bean, the MLB’s vice president of social responsibility and inclusion.

The Rays announced the dedication on the team website, using Twitter to issue a prview of the free T-shirt, which is meant to serve as a “symbolic gesture of unity and inclusion.”

Two other MLB teams also made similar announcements. The Oakland Athletics and Washington Nationals also stated they will dedicated their annual LGBTQ pride nights to the victims. Both A’s Pride Night and Nationals Night OUT are set to take place Thursday.

According to the Rays’ website, MLB Commissioner Rob Manfred will be featured in a pre-recorded video to be shown at Friday’s game.

Pride Night on Tuesday will be dedicated to the victims in Orlando. #LoveIsLove #LoveWins pic.twitter.com/bLI0HD1yq3

PHOTO: ST. PETERSBURG, FL – JUNE 12: Members of the Tampa Bay Rays celebrate a win over the Houston Astros in a game at Tropicana Field on June 12, 2016 in St. Petersburg, Florida. (Photo by Mike Carlson/Getty Images)