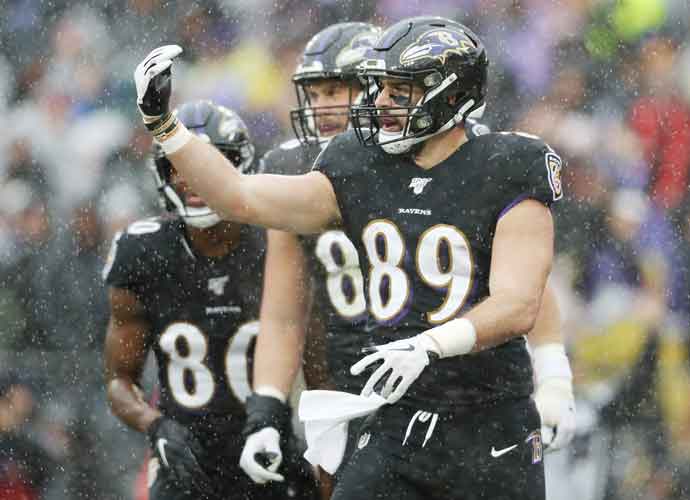 BALTIMORE, MARYLAND – DECEMBER 01: Mark Andrews #89 of the Baltimore Ravens celebrates catching a 20-yard touchdown pass during the first quarter against the San Francisco 49ers at M&T Bank Stadium on December 01, 2019 in Baltimore, Maryland.

Ravens Tight End Mark Andrews was seen using the “planting the flag” celebration to mock San Francisco 49ers defensive end Nick Bosa after a 20-yard touchdown reception in Sunday’s 20-17 win in Baltimore. After running into the end zone Andrews motioned for his teammates Mark Ingram and Hayden Hurst to join him to make the “planting the flag” gesture.

The original celebration was started by Baker Mayfield in a college football game between Oklahoma and Ohio State on September 9, 2017. After Oklahoma defeated Ohio State, Mayfield ran back onto the field and planted an Oklahoma flag in the middle of the Ohio State “O” on the 50-yard line.

Bosa, who played for Ohio State in that game got revenge on Mayfield when the 49ers defeated the Browns 31-3 on Monday Night Football earlier this season. It was the only game of the season where Mayfield’s poor play forced him to the bench. On one play, Bosa clinged on to Mayfield’s legs and forced him to throw the ball away.  Bosa said he told Mayfield, “Baker? Baker? You good? Come on, pick it up. We want a challenge.” Bosa followed this up by mocking him with the same celebration Mayfield had used against Ohio State.

Andrews, who is a close friend and former teammate of Mayfield’s said, “It was a little comeback. ‘Bosa, Bosa,’ it was one of those things, just like he said, ‘Baker, Baker.’ It is what it is. Just having fun out there. You kind of talk bad about Oklahoma, you’re going to get reprimanded.”

It went back and forth with other players copying touchdown dances. 49ers wide receiver Deebo Samuel imitated Raven’s quarterback Lamar Jackson‘s signature moves after a 33-yard touchdown. “They can have fun doing that on the flight home,” said Raven’s cornerback Jimmy Smith.

This TD by @Mandrews_81 sets a new franchise record for touchdowns in a season (48). 😈 pic.twitter.com/aQtRj6xUDM