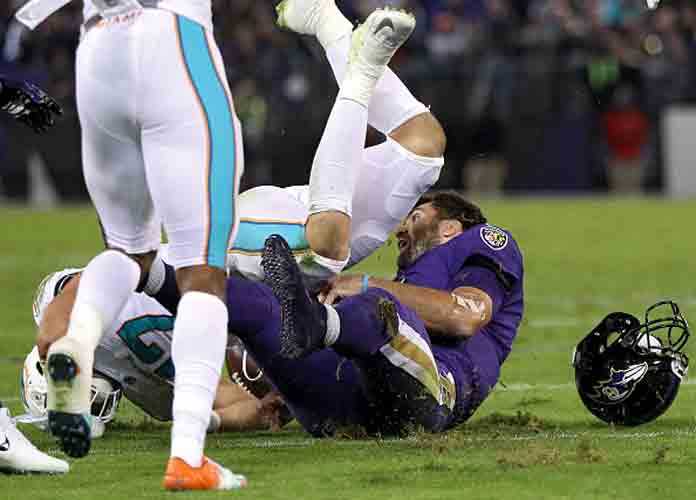 BALTIMORE, MD - OCTOBER 26: Quarterback Joe Flacco #5 of the Baltimore Ravens is tackled by middle linebacker Kiko Alonso #47 of the Miami Dolphins during the second quarter at M&T Bank Stadium on October 26, 2017 in Baltimore, Maryland. Flacco left the game after the hit. (Photo by Patrick Smith/Getty Images)

The Baltimore Ravens cruised to a 40-0 home victory over the Miami Dolphins on Thursday night, but the win came at a cost.

Joe Flacco took a brutal hit to the head from linebacker Kiko Alonso after sliding at the end of a scramble in the second quarter.

Flacco — whose helmet flew off after the hit — was ruled out of the contest with a concussion, and also required stitches for a cut on his ear.

Miami was called for a 15-yard penalty for unnecessary roughness. Several NFL pundits claimed harsher punishment should have been dealt:

That should be a suspension. QB giving himself up. Late and violent and blatantly illegal shot to the head

Alonso deserves to be ejected for that. Flacco was already sliding. That’s a dirty hit.

How is Alonso still in this game?

A brawl soon broke out as players, including center Ryan Jensen and tackle Ndamukong Suh, some of whom argued with the officials and/or attempted to defend Flacco.

“I felt it was a dirty hit,” said Jensen, who is known as the team’s biggest fighter. “He’s our franchise [and] he’s our franchise quarterback. Him getting cheap-shotted like that, I fell like I had to do something to protect him and show him that we got his back.”

Three plays later, the Ravens exacted their revenge on Alonso. Ben Watson capitalized on Alonso’s misread and got open for a two-yard touchdown pass from Ryan Mallett.

“If you mess with one of us, you got to mess with all of us. We went out there and gave everything we had for Joe, the team, the coaches and Baltimore,” Ravens defensive tackle Brandon Williams said. “We had to let everybody know that you can’t just mess with one of us and expect not to get hit 53 more times.”

Ravens coach John Harbaugh was fuming after Alonso’s hit, and he even yelled at the linebacker from the sideline.

The Dolphins next host the Oakland Raiders on Nov. 5, when the Ravens (4-4) visit the Tennessee Titans.

BALTIMORE, MD – OCTOBER 26: Quarterback Joe Flacco #5 of the Baltimore Ravens is tackled by middle linebacker Kiko Alonso #47 of the Miami Dolphins during the second quarter at M&T Bank Stadium on October 26, 2017 in Baltimore, Maryland. Flacco left the game after the hit. (Photo by Patrick Smith/Getty Images)