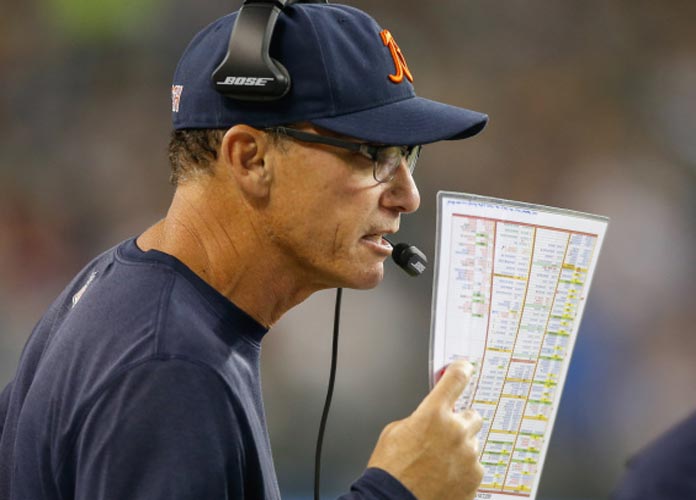 SEATTLE, WA - AUGUST 22: Head coach Marc Trestman of the Chicago Bears looks on during the game against the Seattle Seahawks at CenturyLink Field on August 22, 2014 in Seattle, Washington. The Seahawks defeated the Bears 34-6. (Photo by Otto Greule Jr/Getty Images)

The Baltimore Ravens have fired their offensive coordinator for the second time in four years, a move that comes during the season in an attempt to jump-start a middling offense.

The Ravens announced the termination of former Bears coach Marc Trestman following the team’s 16-10 loss to the Washington Redskins on Sunday. Trestman took over the Baltimore job in 2015 and crafted the NFL’s 25th-best scoring offense without the help of quarterback Joe Flacco.

Thus far in 2016 with the Pro Bowler under center, the Ravens are 3-2 but only scoring about 19 points per game, which is half of what the league-leading Atlanta Falcons are posting. Veteran offensive coordinator and current quarterbacks coach Marty Mornhinweg will assume play-calling duties.

In 2012, Baltimore fired Cam Cameron in favor of Jim Caldwell and went on to win the Super Bowl.

“After very careful consideration, I have decided to make a change to our offensive coaching staff and have replaced Marc Trestman with Marty Mornhinweg as offensive coordinator for the rest of the season,” Ravens head coach John Harbaugh said in a statement. “My obligations are to the team, the organization and the fans to be the very best team we can be. Today we find ourselves one game out of the division and conference lead after experiencing two tough losses at home. We will work to be better in every aspect of our football team. Our expectations are high, and we look forward to fulfilling them.”

Harbaugh’s statement continued: “I appreciate and respect the efforts and contributions Marc has made to the team since his arrival. Marc is a good person and an excellent football coach.”

Former Ravens running back Justin Forsett also commented on the Trestman firing while doing a guest spot on Good Morning Football: “The offense wasn’t performing like it could be. I guess the coaches, the powers that be, thought, ‘Hey, we got to move forward.’ I didn’t see this coming for sure.”

As the last few seasons have demonstrated, an in-season coordinator change can damage a team that is not living up to its potential. The Lions replaced Joe Lombardi with Jim Bob Cooter a year ago and witnessed a strong improvement in quarterback Matt Stafford (even if that improvement did not continue in 2016).

This year, the Buffalo Bills moved from Greg Roman to rising star Anthony Lynn and have improved from 0-2 to 3-2, with victories over the Rams, Patriots and Cardinals on the record.

Mornhinweg was the offensive coordinator of the Philadelphia Eagles from 2006-12 and the New York Jets from 2013-14. His play-calling has occasionally been called innovative. In Mornhinweg’s 15 seasons as a play-caller, his teams have finished in the top 10 in points and yards eight different times.

Trestman, 60, was the offensive coordinator for North Carolina State before a stint as the head coach of the Canadian Football League’s Montreal Alouettes and the Bears from 2013-2014.

SEATTLE, WA – AUGUST 22: Head coach Marc Trestman of the Chicago Bears looks on during the game against the Seattle Seahawks at CenturyLink Field on August 22, 2014 in Seattle, Washington. The Seahawks defeated the Bears 34-6. (Photo by Otto Greule Jr/Getty Images)