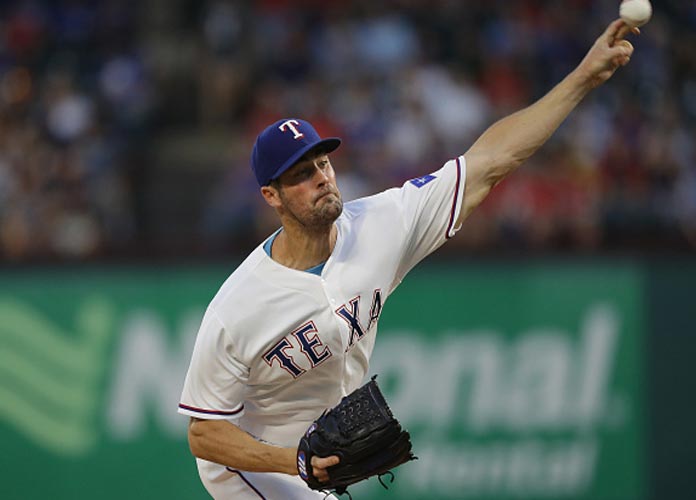 ARLINGTON, TX - AUGUST 25: Cole Hamels #35 of the Texas Rangers throws against the Cleveland Indians in the second inning at Globe Life Park in Arlington on August 25, 2016 in Arlington, Texas. (Photo by Ronald Martinez/Getty Images)

Texas Rangers pitcher Cole Hamels and his wife Heidi are donating their mansion in Branson, Missouri to charity.

The 32,000-square-foot home — listed at $9.4 million on Realtor.com — will be given to Camp Barnabas, a nonprofit that helps children with special needs and chronic illnesses.

“Seeing the faces, hearing the laughter, reading the stories of the kids they serve; there is truly nothing like it,” said Hamels, a four-time All-Star. “Barnabas makes dreams come true, and we felt called to help them in a big way.”

Heidi Hamels grew up in Buffalo, Missouri, about 85 miles away from the mansion. The Hamels began building the house — which sits on over 100 acres of land — in 2012. It went up for sale in August of this year.

“Our mission is to change lives through disability ministry, and we’ve been strategically looking for ways to expand our ministry outside of a summer camp,” said Jason Brawner, CEO of Camp Barnabas. “We have no doubt this gift will allow us to do just that.”

Hamels and his wife initially believed they would live in the mansion long-term. However, after Hamels was traded from the Philadelphia Phillies to the Rangers in 2015, the couple moved to Texas and never moved into their Missouri estate.

Hamels helped lead the Phillies to a national title in 2008, and was also named the World Series MVP and NLCS MVP that year.

ARLINGTON, TX – AUGUST 25: Cole Hamels #35 of the Texas Rangers throws against the Cleveland Indians in the second inning at Globe Life Park in Arlington on August 25, 2016 in Arlington, Texas. (Photo by Ronald Martinez/Getty Images)