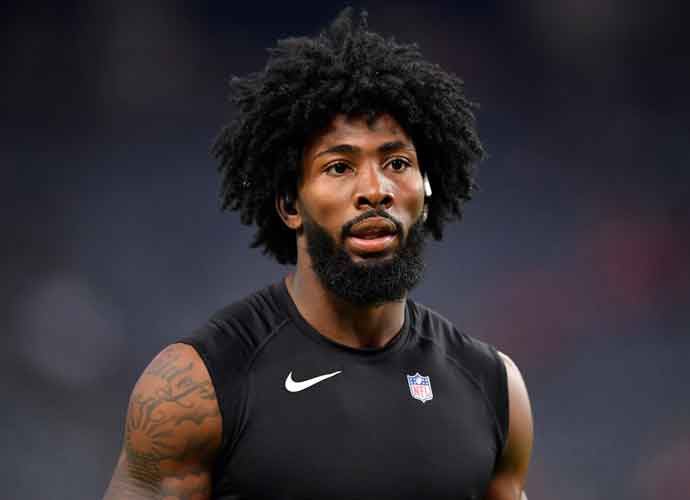 LAS VEGAS, NEVADA – NOVEMBER 14: Cornerback Nate Hobbs #39 of the Las Vegas Raiders warms up before a game against the Kansas City Chiefs at Allegiant Stadium on November 14, 2021 in Las Vegas, Nevada. The Chiefs defeated the Raiders 41-14. (Photo by Chris Unger/Getty Images)

The arrest came mere hours after the team returned from a last-second victory in Indianapolis that kept its playoff hopes alive.

The Las Vegas Metropolitan Police Department says in a release, “at approximately 4:09 a.m., LVMPD Dispatch received a call reference a driver asleep inside of a vehicle, which was parked on the exit ramp of a parking garage located in the 3500 block of South Las Vegas Boulevard.

“Arriving officers made contact with the driver, identified as 22-year-old Nathan Hobbs. He was given FST’s (field sobriety test) by patrol and failed. He was transported to the Clark County Detention Center where he was booked for DUI (misdemeanor).”

Just two months and one day prior, Ruggs was involved in a fiery high-speed crash that claimed the life of a 23-year-old woman and her dog—and could come with 50 years in prison on felony DUI and reckless driving charges.

In another ominous anniversary coincidence, the arrest comes 364 days after running back Josh Jacobs was arrested on a DUI charge after a single-vehicle collision near the Las Vegas airport.

“The organization has been in communication with local law enforcement and is in the process of gathering more information,” a Raiders statement read. “We will have no further comment at this time.”

Hobbs, a fifth-round pick out of Illinois, has been solid for the Raiders (on the field) as a nickel cornerback with an interception, two passes defensed, a forced fumble, and a sack among his 67 tackles in 15 games.

The Raiders (9-7) clinched their first winning season since 2016 with the 23-20 win against the Colts; they’ll host the Los Angeles Chargers (9-7) on Sunday night. A win would give them their second playoff berth since 2002, and even a lose could spell playoffs if the Colts lose in Jacksonville and the Steelers lose against the Ravens. Both the Raiders and Chargers could get in with a tie if the Colts lose.

“As far as the distractions go, we’ve kind of learned how to deal with distractions around here,” Raiders interim coach Rich Bisaccia said. “We’re certainly disappointed in the news. I don’t have all the facts yet. I’ll be able to comment, I would think, as the end of the week comes, when I get more information about what’s going to actually happen with that.”