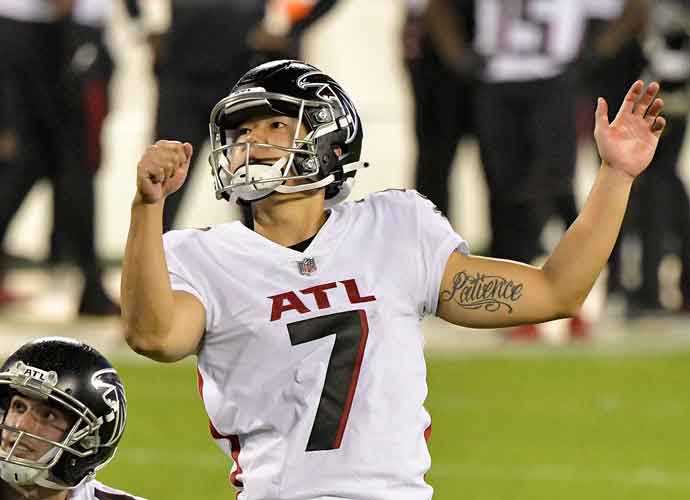 CHARLOTTE, NORTH CAROLINA - OCTOBER 29: Younghoe Koo #7 of the Atlanta Falcons kicks a field goal against the Carolina Panthers during the third quarter at Bank of America Stadium on October 29, 2020 in Charlotte, North Carolina. (Photo by Grant Halverson/Getty Images)

Atlanta Falcons Pro Bowl kicker Younghoe Koo had his jeep stolen from him. Koo then took to social media to plead for the return of his cleats.

Koo began his NFL career with the Los Angeles Chargers in 2017. He only played in four games and was 3-of-6 on field-goal attempts. He was only 1-for-4 from 40 yards or more from the goalposts. The kicker then spent time with the Atlanta Legends of the Alliance of American Football before signing with the New England Patriots practice squad during the 2019 season. However, he was released just a few days later.

The Falcons signed Koo in 2019 to replace long-time kicker Matt Bryant. Koo had an immediate impact by posting a historic season. The South Korean native led the league in field goals, converting 37-of-39 (94.9%), and went 33-for-36 (91.7%) on extra-point attempts. He also surpassed Bryant for the franchise record in a single season and became the first player in team history to make at least eight field goal attempts of 50-plus yards without a miss. He scored a career-high 144 points in 15 games and was named to his first Pro Bowl.

Koo re-signed with the Falcons in the offseason and is slated to start 2021 as their kicker.