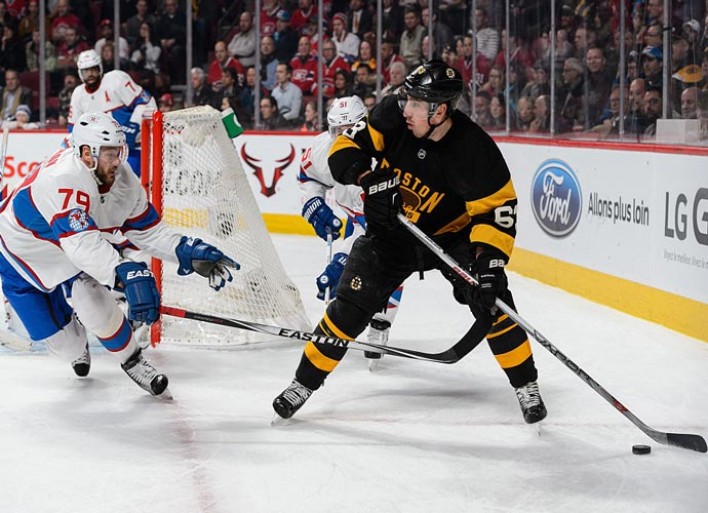 Caption:MONTREAL, QC - JANUARY 19: Brad Marchand #63 of the Boston Bruins looks to play the puck past Andrei Markov #79 of the Montreal Canadiens during the NHL game at the Bell Centre on January 19, 2016 in Montreal, Quebec, Canada. (Photo by Minas Panagiotakis/Getty Images)

After six years of not making the Stanley Cup Finals, the Boston Bruins took a crucial 4-2 Game one win at the TD Garden against the St. Louis Blues on Memorial Day.

With Monday night’s win secured, the Bruins will look to take a favorable lead in the series. Thursday’s Game two in Boston will start at 8 p.m. EST and will air on NBC Sports.

Left-wing Sean Kurlay led the Bruins in points with a goal and an assist. Defensemen Charlie McAvoy and Connor Clifton and left-wing Brad Marchand all scored as well.

The Blues (45-28-9) won’t fold this easily, however. This team has battled adversity as much as anyone this season, as they were in last place at the start of 2019. The Blues started Game one off the way they wanted to, leading 2-0 at one point, but began to struggle as the Bruins started to settle in. Discipline and perhaps a lack of experience caved in for the Blues. As interim head coach Craig Berube told ESPN, “Five penalties takes a lot of guys out of the game and uses up a lot of energy of other guys.”

If the Bruins win this years Stanley Cup, the city of Boston will be the first town since Detroit in 1935 to have three major titles at one time, as the Patriots and the Red Sox are current champions. Since the turn of the century, the city of Boston has won six Super Bowls, one NHL Stanley Cup playoffs, one NBA Finals and four MLB World Series.