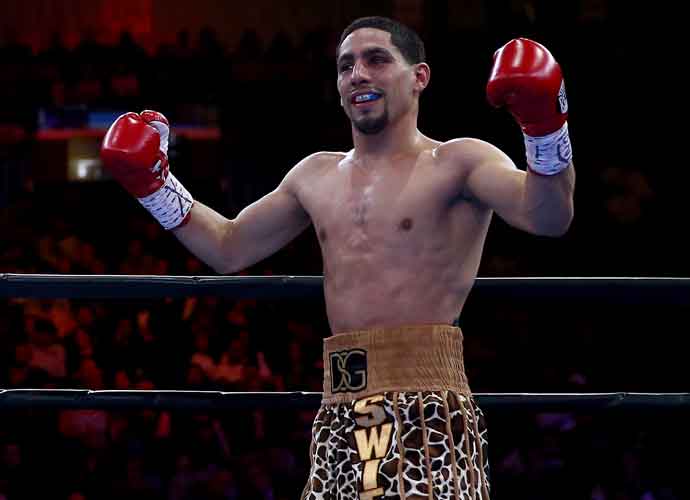 NEW YORK, NY - APRIL 11: Danny Garcia reacts during his fight with Lamont Peterson during the Premier Boxing Champions Middleweight bout at Barclays Center on April 11, 2015 in the Brooklyn borough of New York City.

Premier Boxing Champions Tickets are on sale now! Don’t miss out on seeing some of boxing biggest stars! On Saturday, January 25, former WBC welterweight champion Danny Garcia (35-2, 21 KOs) kicks things off against the challenger Ivan Redkach (23-4-1, 18 KOs) in a 12-round WBC welterweight title eliminator live on Showtime from Barclays Center in Brooklyn, NY. The telecast will begin at 9 p.m. ET. Garcia is coming off an April TKO victory over Adrian Granados.

“I’m ready, I feel good. I know this guy (Redkach) hits hard. I’m not looking past him, I can guarantee that. Hey, I’m just trying to take it one at a time. I don’t want to get too ahead of myself. I’ve been that way my whole career. I know that you can’t overlook anyone. I’m totally locked in on (Redkach),” Garcia said Saturday while hanging out in the dressing room of Temple University’s Liacouras Center before fellow Philly Native Julian Williams unsuccessfully defended his 154-pound title.

“I watched a few of Redkach’s recent fights and he had a great knockout win over two-time champion Devon Alexander. So, I know he’s a tough fighter and competitor who I expect to bring the best out of me, and he’s someone who deserves this opportunity. But January 25 is tax season, so I’m going to have to tax him and pay him with a reality check,” Garcia told RingTV.

Redkach is definitely not a familiar name to hardcore boxing fans but the Ukrainian native sounds ready for the biggest challenge of his career.

“I’m very motivated to take a massive step in my career and get closer to becoming world champion against a strong and accomplished fighter like Danny García. I have been to a lot of Danny’s fights and now I get the chance to test myself against him. I am training very hard so that I am the best that I have ever been on January 25. I’m going to shock the boxing world just like I did against Devon Alexander. I’ve never been this hungry before and I’m confident I will win this fight,” Redkach told Showtime.

Here’s a list of dates, deals and ticket information: