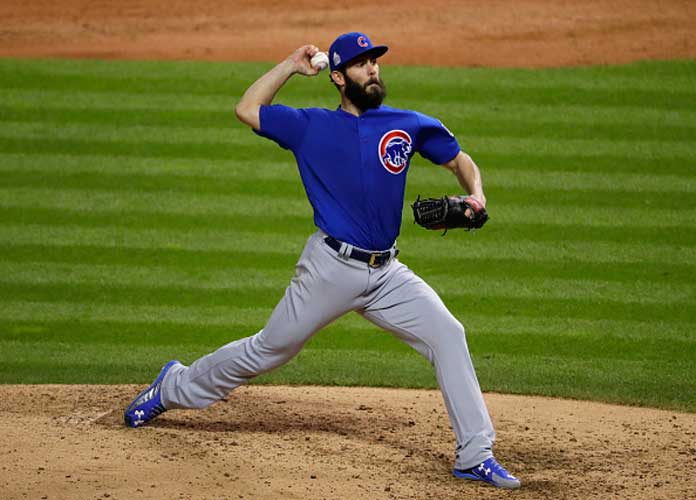 CLEVELAND, OH - OCTOBER 26: Jake Arrieta #49 of the Chicago Cubs throws a pitch during the sixth inning against the Cleveland Indians in Game Two of the 2016 World Series at Progressive Field on October 26, 2016 in Cleveland, Ohio. (Photo by Jamie Squire/Getty Images)

Jake Arrieta is angry at the Philadelphia Phillies for their recent performances, and understandably so.

The Phillies (31-26) have dropped six of their last eight games, and are third in the NL East. Included in this run is a three-game series loss to the Giants in San Francisco. After losing 4-0 and then 2-0, Arrieta drove in Philadelphia’s only run of the series in the final game, which the Giants won 6-1 on Sunday.

Arrieta’s criticism of his own team didn’t stop there, however.

“We’ve had bad defensive shifts. We had a checked swing,” he added. “[Shortstop Scott] Kingery should’ve gone to second on that play. And they got three hits in a row. The home run — credit [Andrew] McCutchen for putting a good swing on it, but did not expect a ball like that to get out.”

Arrieta specified further what be believes the Phillies need to improve on defensively.

“We’re the worst in the league with shifts, so we need to change that,” he added.

The Phillies next start a three-game series against the Cubs in Chicago on Tuesday. According to ESPN, Arrieta (5-3, 2.66 ERA) is not expected to pitch for that series. The right-hander is next set to start against the Milwaukee Brewers at home on Saturday.

Arrieta signed a three-year, $75 million deal with the Phillies in March.