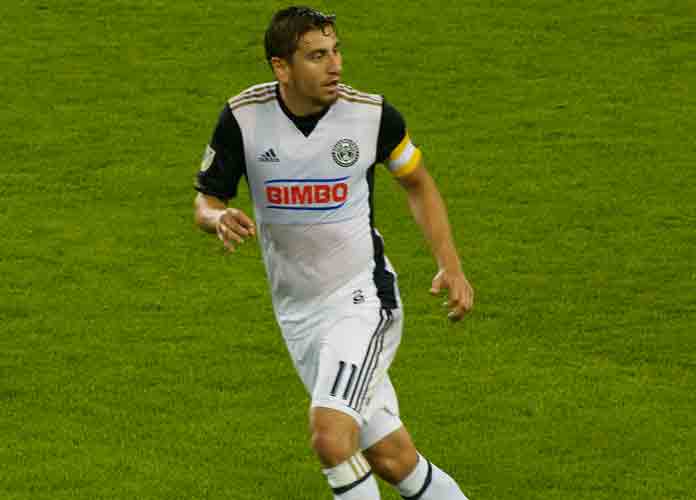 Alejandro Bedoya with the Philadelphia Union in 2017 (Noah Salzman/Wikipedia)

Sunday night in the MLS, the Philadelphia Union’s captain Alejandro Bedoya scored the first goal in a 5-1 routing against DC United.

Bedoya used his goal celebration to head over to a FOX Sports 1 broadcast microphone on the sideline, where he yelled “Hey Congress, do something now. End gun violence. Let’s go!” he said, according to ESPN.

His comments came after the El Paso, Texas and the Dayton, Ohio mass shootings that took place this past weekend, where 29 people combined were killed and over 50 others were injured.

Philadelphia Union soccer player Alejandro Bedoya scores a goal in tonight's game against D.C. United, runs over to a field microphone and shouts, "Congress, do something now. End gun violence."
Via FS1 pic.twitter.com/7WH4PA08cs

According to ESPN FC, the MLS later confirmed that Bedoya would not be suspended or fined for his remarks on the broadcast microphone. His message was understandable to all those watching on the broadcast, but unfortunately couldn’t be heard by those attending the game at the stadium.

“The Major League Soccer family joins everyone grieving for the loss of lives in Texas and Ohio, and we understand that our players and staff have strong and passionate views on the issue,” the MLS statement read, according to ESPN.

Before the match and after the attacks in Texas and Ohio, Bedoya tweeted out, “we can start with stricter background checks, red flag laws, making a registry for gun purchases, closing gun show loopholes, and taxing ammunition.”

The Union and head coach Jim Curtin explained their full support of Bedoya’s comments on the field after the game. The club released a statement, saying, “the Philadelphia Union support Alejandro Bedoya,” the team said, according to New York Times. “He is taking a stand. The events that transpired this weekend across the country are deplorable. Our hearts go out to everyone affected.”

STATEMENT MADE! ✊ A great team effort to get the win and 3 points. In regards to my statement during my goal celebration, it’s a shame it’s seen as a political one. For me, my comments were simply humane. Sharing a sentiment that I consider most Americans can agree on. As in, we need to act like the UNITED States of America and come together to work on solutions to put an end to the gross rate of gun violence in our great country. It should be a bipartisan effort to discuss all methods of making it harder to access certain types of weaponry while still allowing law abiding citizens the right to defend themselves. No civilian should need weapons of war or a magazine with 100 rounds. Leave those for a gun range facility. My call towards Congress is that we can’t just simply sit idly by and continue to watch and hear about these tragedies without even trying to continue to implement new laws while also helping those with mental illness. And before you tell me to “stick to sports,” I will let you know that I am a human being that also has emotions and is affected by things happening in our society before I am just an athlete! We are ONE country and I have faith we can limit these tragedies substantially from happening in the future. God bless. 🙏

I’m not a policymaker either. I’m shouting at those hypocrites to get their shit together. You want some plans. We can start with stricter background checks, red flag laws, making a registry for gun purchases, closing gun show loopholes, and taxing ammunition. Better for you? https://t.co/pHNw6EdueX

Bedoya, a 32-year-old born in New Jersey of Colombian descent, played college soccer in the United States. He went overseas to play in the French League, the Scottish league and Swedish league before returning to the United States to play for the Union in 2016. He was a starter for the U.S. Men’s National Team when the team went to the 2014 World Cup in Brazil, where they lost to Belgium in the quarterfinals.