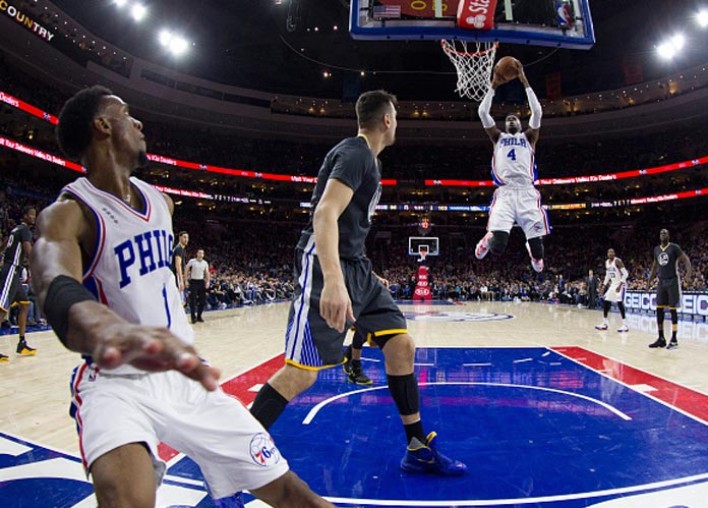 PHILADELPHIA, PA - JANUARY 30: Ish Smith #1 of the Philadelphia 76ers passes an alley-oop to Nerlens Noel #4 against the Golden State Warriors on January 30, 2016 at the Wells Fargo Center in Philadelphia, Pennsylvania. The Warriors defeated the 76ers 108-105.

The Philadelphia 76ers became the first team to take advantage of the NBA’s new position on jersey sponsors, as the franchise announced Monday that a patch advertising ticket resale company StubHub would appear on the team’s uniforms.

Just last month, the NBA announced it would be the first among the four major sports leagues to permit advertising on regular season uniforms as part of a three-year trail approved by owners. As part of the trial, teams will be allowed to sell advertising in the form of a patch, approximately 2.5 inches x 2.5 inches, beginning in the 2017-2018 season, coinciding with Nike’s new deal with the league.

“First off, hats off to (NBA Commissioner) Adam Silver,” Sixers CEO Scott O’Neil told USA TODAY Sports. “He’s a commissioner who will take opportunities and will make the right decision and sometimes the tough decision, and he continues to lead through policy. He gives teams the opportunity to drive our business.”

The three-year deal is reportedly worth $5 million per season, according to a source familiar with the deal. The person spoke to USA TODAY Sports on the condition of anonymity because they are not authorized to speak publicly on the matter.

“We are thrilled to further our long-standing relationship with the Philadelphia 76ers to announce the NBA’s first jersey patch sponsor,” said StubHub President Scott Cutler. “StubHub and the Sixers share a common vision as innovators in the live entertainment space and specifically, for the fan experience, and this partnership is another example of ways we continue to break new ground together to further our industry and ultimately, connect more deeply with fans.”

Jersey advertising is projected to generate approximately $150 million annually, revenue that will be split among the league, the teams, and players under the rules of the 2011 collective bargaining agreement.

“When you’re given and afforded an opportunity like that from the league, for us, it was important to find StubHub, a company that has a natural fit into this business and is so ingrained in the daily lives of our fans,” O’Neil stated. “Everything from the look and feel to the people to the culture and to the actual business, it’s exactly the company we wanted.”

Under the new deal, teams are now granted the option to sell jerseys with sponsor patches in their own retail stores, something the Sixers announced they plan to do.

PHOTO: PHILADELPHIA, PA – JANUARY 30: Ish Smith #1 of the Philadelphia 76ers passes an alley-oop to Nerlens Noel #4 against the Golden State Warriors on January 30, 2016 at the Wells Fargo Center in Philadelphia, Pennsylvania. The Warriors defeated the 76ers 108-105.