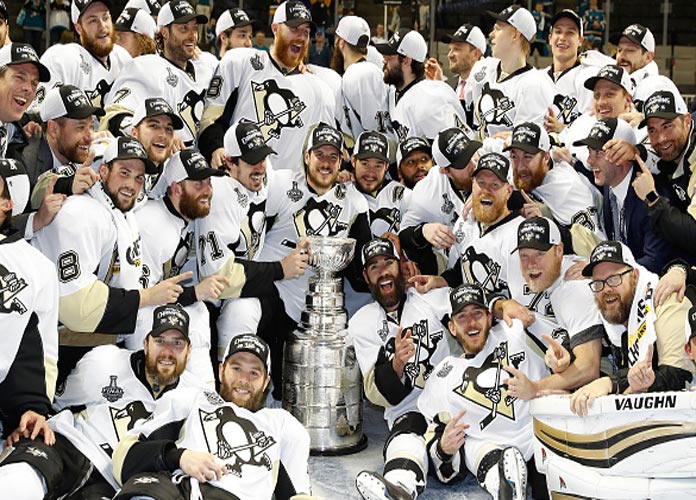 The Pittsburgh Penguins clinched their fourth national championship title after defeating the San Jose Sharks at the SAP Center in Game 6 of the Stanley Cup Finals on Sunday night. Pittsburgh’s last Stanley Cup title came in 2009.

Captain Sidney Crosby fed defenseman Kris Letang for a one-timer low in the right face-off circle that found its way into the net at 7:46 of the second period to give the Penguins a 2-1 lead.

The game began with a minute of silence for the victims of the shootings at gay nightclub Pulse in Orlando, Florida on Saturday night, and ended after Crosby cleared the puck the length of the ice with the Sharks on a power play, and then the Penguins began celebrating.

“Man, I’m going to remember this day for the rest of my entire life,” said 22-year-old rookie Pittsburgh goaltender Matt Murray. “I probably won’t believe this until next year, to be honest. It’s so surreal.” Murray had 18 saves and was 6-0 with a 1.63 goals-against average and .936 save percentage, according to the Elias Sports Bureau.

Brian Dumoulin opened up scoring on a power play at 8:16 of the first, after San Jose forward Dainius Zibrus was sent to the penalty box for tripping. Dumoulin took a shot from the left point that flew past Sharks goalie Martin Jones to give the Penguins a 1-0 lead. Jones, who finished with 24 saves, made two key stops on Crosby later in the period, however, that came in a five-second span after a Sharks giveaway.

San Jose tied the game at 6:27 of the second period when center Logan Couture used Pittsburgh defenseman Justin Schultz as a screen and beat Murray with a 21-foot wrist shot. The goal marked Couture’s 30th point of the postseason, the best in the NHL.

Letang then answered 79 seconds later to put the Penguins ahead, and Crosby added yet another assist to Patrick Hornqvist, who scored an empty-net goal with 1:02 remaining in the game to seal the victory.

“It’s so hard to win it year after year,” said owner Mario Lemieux, who won back-to-back titles and Conn Smythe trophies as a player for Pittsburgh. “For them to be able to come through this year and win their second Cup is big. Hopefully there’s a few more for them.”

Crosby, who finished with 19 postseason points, was awarded the Conn Smythe Trophy, which is given to the MVP of the playoffs. In his post-game press conference, he compared the win to his team’s prevoius title seven years ago.

“I have a greater appreciation this time around,” the 28-year-old Crosby said, noting that after back-to-back appearances in the finals in 2008 and 2009, “you just think it’s going to be an annual thing.”

None of Pittsburgh’s four national championships have come on home ice.

“As I’ve said to them all along, I know our team is going to score goals,” Penguins coach Mike Sullivan said. “In order to win championships, you’ve got to keep it out of your net. You have to become a team that is stingy defensively. Everybody has to buy in to that idea for us to get to where we want to go. To their credit, they did, down to a man.”

The Penguins had entered the playoffs as the No. 2 seed in the Metropolitan Division, defeating the New York Rangers, Washington Capitals and Tampa Bay Lightning on route to the finals. They corrected their season after Sullivan replaced Mike Johnston on Dec. 12 as head coach when the team was near .500.

Despite the loss, Sharks coach Peter DeBoer expressed pride of his team, which finished third in the Pacific Division after victories over the Los Angeles Kings, the Nashville Predators and the St. Louis Blues.

I’m very proud of our group,” DeBoer said. “I thought our guys emptied the tank, gave us everything they possibly could. We weren’t as good as them during this two-week period.”