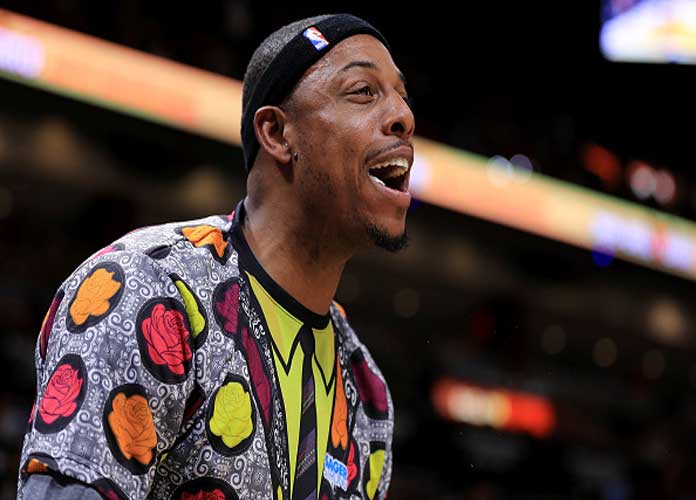 MIAMI, FL - DECEMBER 16: Paul Pierce #34 of the LA Clippers reacts to a play during a game against the Miami Heat at American Airlines Arena on December 16, 2016 in Miami, Florida. (Photo: Getty)

Draymond Green did not shy away from taking a verbal jab at Paul Pierce in Thursday’s game between the Golden State Warriors and Los Angeles Clippers.

In the opening minutes of the Warriors’ 123-113 home victory, Green began trash-talking the 39-year-old former Boston Celtics star, who is set to retire soon. The Warriors star taunted Pierce by saying he wouldn’t get a farewell tour like Kobe Bryant did in his final season last year because he wasn’t as loved.

Draymond to Pierce: “Chasing that farewell tour. They don’t love you like that…you thought you was Kobe!” 💀 pic.twitter.com/afxKRyIxGv

The above video displays Green’s infamous kick-and-flop, a foul that has gained the Warrior a reputation as a dirty player in the past two seasons.

Green previously criticized Pierce for the latter’s comments about Kevin Durant, in which Pierce said the former Oklahoma City Thunder forward was less competitive for signing with the Warriors last summer.

“I just wonder at what point do they get bored talking about the same thing. You got all these guys talking. Like (Paul) Pierce today, like, dude nobody care what you did or who you did it for,” Green told our Warriors beat writer Anthony Slater in October. “Just give it a break. Everybody got something to say and want to take everything he say and twist it.”

Early Friday morning, Pierce fired back at Green’s Thursday taunts with a vicious tweet that delighted scores of NBA fans. Pierce mocked Green and the Warriors for believing they would win last year’s NBA Championship after setting a record with 73 victories. Golden State blew a 3-1 lead in the Finals to lose the 2016 title to the Cleveland Cavaliers.

One fan, however, was quick to remind Pierce that his team once blew a similar 3-2 playoff lead to the Lakers.

@paulpierce34 you blew a 3-2 lead to lakers my guy

The Warriors’s win on Wednesday was their 10th straight over the Clippers dating back to the 2014-15 season.

The Clippers next host the San Antonio Spurs on Friday night, while the Warriors will host the Brooklyn Nets on Saturday night.

MIAMI, FL – DECEMBER 16: Paul Pierce #34 of the LA Clippers reacts to a play during a game against the Miami Heat at American Airlines Arena on December 16, 2016 in Miami, Florida.