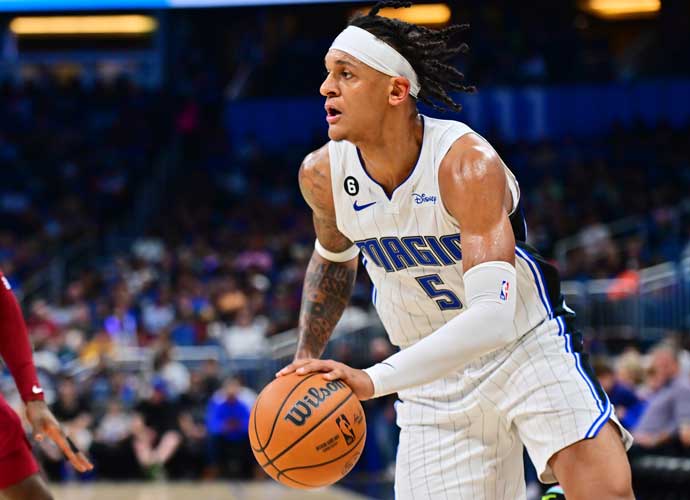 ORLANDO, FLORIDA - OCTOBER 14: Paolo Banchero #5 of the Orlando Magic looks on after a foul in the second half against the Cleveland Cavaliers at Amway Center on October 14, 2022 in Orlando, Florida. NOTE TO USER: User expressly acknowledges and agrees that, by downloading and or using this photograph, User is consenting to the terms and conditions of the Getty Images License Agreement. (Photo by Julio Aguilar/Getty Images)

Orlando Magic power forward Paolo Banchero put on a show in his debut Wednesday night, scoring 27 points with nine rebounds and five assists in a losing effort to the Detroit Pistons. The 19-year-old first-overall pick became the first player since LeBron James to earn a 25-5-5 in his first regular season game.

Paolo Banchero was HISTORIC, becoming the first No. 1 overall pick to drop 20+ PTS, 5+ REB, and 5+ AST in their NBA debut since LeBron James in 2003! pic.twitter.com/RrQwbl5h7r

Coming out of Duke last season, many experts viewed Banchero as the best prospect in his draft class, having scored 17.2 points per game for the Blue Devils despite playing through a medical condition that made him sweat profusely and lose up to seven pounds per game. The Magic selected him first overall in a decision that seems rewarding thus far.

Banchero’s debut, in which he played for 35 minutes, began quickly in the first quarter when he scored the Magic’s first two baskets of the game. For a player with severe stamina issues in college, it was encouraging to see him finish well, as he scored 13 points in the fourth quarter in the midst of a failed Orlando comeback bid. He went 11-for-18 over the course of the game and five-for-seven on free throws.

Following the game, the promising teen said he was happy about his performance but expressed a greater desire to win.

“It means a lot, I guess,” Banchero said. “Obviously, would have liked to win. But I just wanted to play hard, play for the team, and that happened, so it’s a blessing.”

The Magic are coming off a 22-60 regular season last year and expectations remain extremely low in 2022-23. More than anything, this season could be an opportunity for Banchero, along with a slew of other young stars, to develop and mature as a team. Only two players on the roster are older than 25.

Following a hot start to the season, other tests lie ahead for Banchero, as the duration of the season and natural growing pains for the team are sure to present new challenges. Following a highly successful debut, however, his potential is now widely understood.