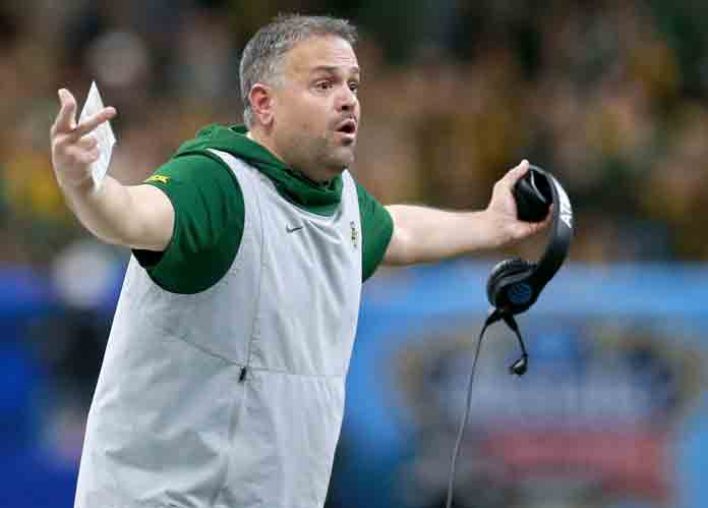 NEW ORLEANS, LOUISIANA - JANUARY 01: Head coach Matt Rhule of the Baylor Bears looks on during the Allstate Sugar Bowl against the Georgia Bulldogs at Mercedes Benz Superdome on January 01, 2020 in New Orleans, Louisiana.

The Carolina Panthers reached a deal to hire Baylor’s Matt Rhule as their new head coach, it was reported Tuesday.

According to ESPN, 44-year-old Rhule had been speculated to join either the Panthers or the New York Giants, who recently fired head coach Pat Shurmur. Just last month, Rhule reportedly said he hoped to return to Baylor. He will now replace Ron Rivera, who was fired this year following a nine-year tenure with the Panthers.  The news concerning Rhule follows the Dallas Cowboys’ hiring of former Green Bay Packers coach Mike McCarthy on Monday.

The #Panthers are hiring #Baylor coach Matt Rhule, source says (as @PeteThamel reported). They are working out the deal as we speak. They did not want him to get on the plane to the #Giants.

Rhule helped the Baylor Bears significantly improve their football team during his three-season stint with the team. Baylor finished the 2017 season 1-11 but went 11-3 in 2019 and also had a winning season in 2018. Carolina will now hope Rhule can do the same for them. The Panthers — who appeared in the Super Bowl 50 four years ago but lost to the Denver Broncos — failed to reach the playoffs this year after finishing 5-11 and fourth in the NFC South. Carolina is also hoping to land one of several new free-agent quarterbacks — like Ryan Tannehill, Teddy Bridgewater or Tom Brady — in the wake of Cam Newton‘s season-ending foot injury, which he suffered early last month.

Matt Rhule to the Carolina Panthers!

Panthers fans you got one hell of a ball coach. Rhule took the Baylor Bears from a 1-11 team, marred by scandal and turmoil, to 11-1… IN TWO YEARS!

He did it by COACHING!

Rhule, a former linebacker at Penn State, also formerly served as an assistant coach at Temple University and coached the Giants’ offensive line in 2012.