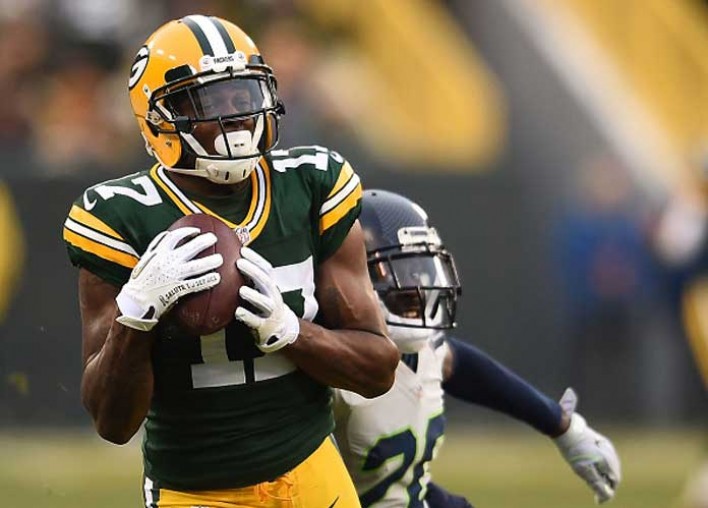 GREEN BAY, WI - DECEMBER 11: Davante Adams #17 of the Green Bay Packers catches a pass for a touchdown during the game against the Seattle Seahawks at Lambeau Field on December 11, 2016 in Green Bay, Wisconsin. (Photo by Dylan Buell/Getty Images)

Adams was transported to a local hospital after Trevathan landed a vicious helmet-to-helmet hit on him in the third quarter of the Packers’ 35-14 victory.

He’s being taken off on a stretcher. pic.twitter.com/KpFFpk6KQY — NFL Update (@MySportsUpdate) September 29, 2017

On Friday morning, Packers coach Mike McCarthy provided a positive update on Adams, whose mouth guard fell out after being hit.

“The news I’ve been given on Davante so far is everything looks positive,” McCarthy said (via the team’s website). “He’s already giving them a hard time at the hospital to get out of there, so that’s a great sign.”

The wideout momentarily lost consciousness and was carried off the field on a stretcher. Adams was evaluated for head and neck injuries and for a potential concussion.

Several Green Bay players expressed particular disgust with the fact that Trevathan celebrated his tackle despite how cheap the shot was. The linebacker later apologized, saying the hit was unintentional and that he’s not a “dirty player.”

“I don’t like anybody celebrating when a guy gets carted off the field,” quarterback Aaron Rodgers said. “That’s kind of the message I was conveying to them.”

Packers tight end Marcellus Bennett reiterated Rodgers’ opinion: “What we thought was f—ed up was that he was celebrating that play,” he said. “You get your ass kicked, you took a cheap shot and you celebrate when a guy goes down. That’s what really pissed us off.”

On Friday morning, an NFL spokesman said Trevathan’s hit is being assessed for potential discipline.

Trevathan was penalized for unnecessary roughness, but was not ejected.

Referee John Hussey said after the game in a pool report conducted by ESPN that he “just didn’t see enough to have it rise to that level [of an ejection].”

“He was being stood up; that’s when 59 [Trevathan] came in, and what I felt was 59 came in and hit a defenseless player in the helmet area unnecessarily,” Hussey said.

.@AaronRodgers12 throws his 4th TD pass of the night & his second to @JordyRNelson! #CHIvsGB #GoPackGo pic.twitter.com/iIYc5eb3EL

Green Bay also lost running back Ty Montgomery to broken ribs on the first drive of the game.

GREEN BAY, WI – DECEMBER 11: Davante Adams #17 of the Green Bay Packers catches a pass for a touchdown during the game against the Seattle Seahawks at Lambeau Field on December 11, 2016 in Green Bay, Wisconsin. (Photo by Dylan Buell/Getty Images)