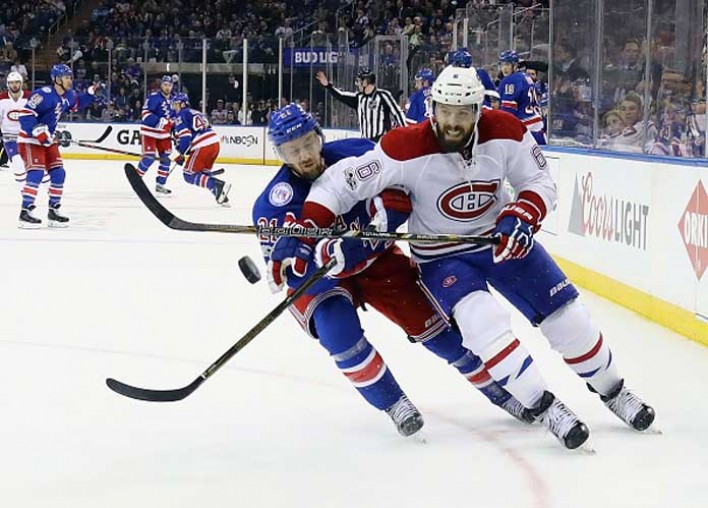 NEW YORK, NY - APRIL 16: Shea Weber #6 of the Montreal Canadiens skates against Derek Stepan #21 of the New York Rangers in Game Three of the Eastern Conference First Round during the 2017 NHL Stanley Cup Playoffs at Madison Square Garden on April 16, 2017 in New York City. The Canadiens defeated the Rangers 3-1.

NHL commissioner Gary Bettman has announced that the NHL season will resume with a 24-team playoff format. With this, there are eight teams that were out of a playoff spot when the season paused on March 12 are in contention to win the Stanley Cup. And with the break between when the season paused and when the season will resume, it will allow these teams to be dangerous sleepers in the playoffs. So let’s break down some of these teams that could make some unexpected noise in the playoffs.

When the season paused the New York Islanders were beginning a collapse, losers of their last seven games before the pause. They were also crippled with injuries to key players of their team like defenders Adam Pelech and Johnny Boychuk and forward Casey Cizikas. The Islanders are 13-13-8 without these players in their lineup. But the big one is Pelech who has been out since January 3 with a torn achilles. The Islanders were 22-8-2 before Pelech went down, and it was announced last week that he will be cleared to play once the season resumes.

Just a few miles west, the New York Rangers were arguably the hottest team in the league when the season came to a halt. Going 7-4-1 in their last 12 games which may not seem too outstanding. But the emergence of Russian goaltender Igor Shesterkin who won nine games in his 10 starts since his arrival on January 7. The Rangers will also have a healthy Chris Kreider back in the lineup who broke his leg in Philadelphia on February 28. The forward had 21 goals and 45 points at the time of his injury and will be available for the Rangers once the season resumes.

Then there are teams that if their players are playing at the level they are capable of they could go on an unexpected run. Teams like Chicago and Montreal were able to squeeze into the playoffs as the bottom teams in the Western and Eastern conference respectively. Chicago has won three championships in the last ten years and still have the same core players of those teams like Patrick Kane, Jonathan Toews, Duncan Keith and goaltender Corey Crawford. All have been playing at championship level this season and who knows if they can make a run at another cup using their past winning experiences.

And Montreal, a team that sold at the trade deadline and a team that receives a lot of criticism. But Montreal could be the biggest “what-if” in the playoffs. They will have a healthy Brendan Gallagher, who led Montreal in goals with 22. They will also have Captain Shea Weber healthy. But by far the biggest “what-if” of the Canadiens and maybe of the entire playoffs is goaltender Carey Price, who is regarded by many to be one of the best goalies in the world when he is playing at a top level. Price has not had a great season but that is due to the fact that he has been forced to play 58 of Montreal’s 71 games due to the lack of depth the Canadiens have in net. Maybe a rested Price will steal the show and help the Canadiens shock the world and win the Stanley Cup.

There are so many great storylines with the 24 team playoff format and it should be an exciting playoffs that should leave fans in shock of how dangerous teams could be.