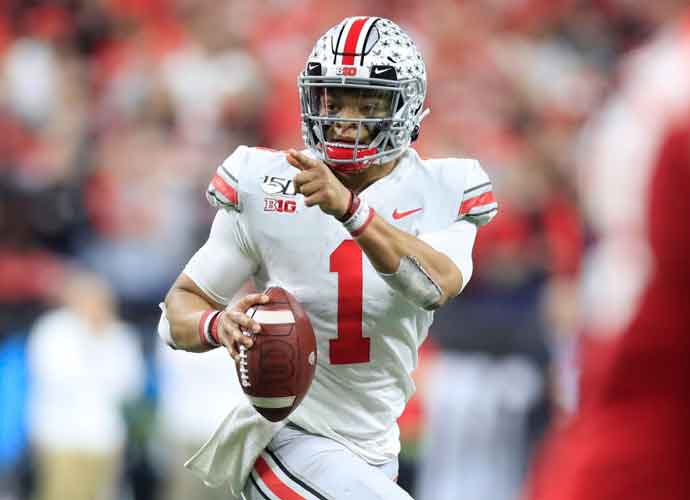 INDIANAPOLIS, INDIANA - DECEMBER 07: Justin Fields #1 of the Ohio State Buckeyes runs with the ball in the BIG Ten Football Championship Game against the Wisconsin Badgers at Lucas Oil Stadium on December 07, 2019 in Indianapolis, Indiana. (Photo: Getty)

Lucas Oil Stadium hosted the Big Ten Championship Game on Saturday against first-ranked Ohio State (13-0) and eighth-ranked Wisconsin (10-3). Ohio State, who struggled in the first half against an eager Wisconsin, came back in the second to win their third straight Big Ten title by a final of 34-21.

The College Football Playoff selection committee is set to announce the four playoff teams Sunday as Ohio State lobbies to remain in the top spot. Head coach Ryan Day said, “They came out and played unbelievable in the second half. This team is unbelievable. I think we deserve to be No. 1.”

Wisconsin, whose lost seven straight in the series, came out with a quick 14 points, giving Ohio State their largest deficit of the season. At half, Wisconsin led 21-7. But Ohio State wouldn’t go down without a fight. Ohio State quarterback Justin Fields, who seemed frazzled in the first half, looked confident as ever in the second and finished the day 19 of 31 with 299 yards and three touchdowns, earning him the game’s MVP. Running back J.K. Dobbins ran with 33 carries for 172 yards with one touchdown and wide receiver Chris Olave had five receptions for 94 yards.

Fields also passed Drew Brees for the second-most TD passes in one season in conference history with 40 passes. Brees threw 39.

Wisconsin did not go down easy though. The Badgers had a dominant first half, showing resilience against the mighty Buckeyes. Quarterback Jack Coan was 17 of 33 for 232 yards. Running back Jonathan Taylor had 20 carries for 148 yards with one touchdown and wide receiver Quintez Cephus had 122 yards on seven receptions.

With Ohio State looking to stay at number one, they will have to hope the committee sees them above LSU. As the Fiesta Bowl and the Peace Bowl will serve as the two national semifinals, the top teams anxiously await to see who will make the top four seeds and who will play who to compete for a spot in the CFP National Championship.