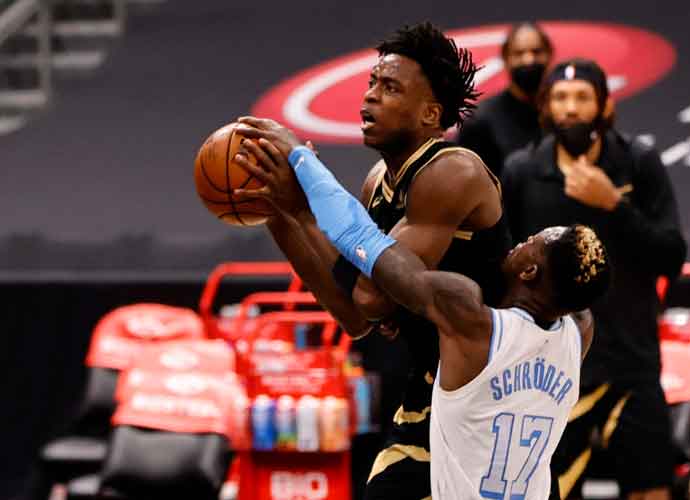 TAMPA, FLORIDA - APRIL 06: OG Anunoby #3 of the Toronto Raptors is fouled by Dennis Schroder #17 of the Los Angeles Lakers during the first quarter at Amalie Arena on April 06, 2021 in Tampa, Florida. (Photo by Douglas P. DeFelice/Getty Images)

The Raptors were hosting the current NBA Champions, and near the end of the first quarter, there was a physical altercation. The altercation occurred during a Toronto fast-break opportunity. Toronto’s OG Anunoby received a long pass during the fast break but was fouled by Lakers guard Dennis Schröder. After the foul was called, Anunoby proceeded to slam Schröder to the floor. Montrezl Harrell immediately came to the defense of Schröder and shoved Anunoby, but Gary Trent Jr. got in front of Harrell. Both Trent and Harrell exchanged shoves with one another as more of their respective teammates came to separate them.

OG Anunoby and Montrezl Harrell were both ejected after this WILD play 😳 pic.twitter.com/yjndrs3ZkA

After the altercation was broken up, Anunoby and Harrell were ejected. Despite throwing shoves, Trent was not ejected because he was not an instigator in the altercation.

The Lakers were able to take care of business despite missing sidelined All-Stars LeBron James, Andre Drummond and Anthony Davis. Toronto was missing Kyle Lowry and Fred VanVleet, both of whom are sidelined due to injuries.

By the end of the first half, Los Angeles led 68-42, and it seemed to be a blowout victory. However, Toronto slowly closed the gap in the fourth. The Lakers continued to hold a 20-point lead in the third quarter, but in the fourth quarter, the Raptors slowly clawed their way back.

Toronto outscored Los Angeles 31-20 in the fourth quarter but fell short of a comeback. The Lakers held on to a 110-101 victory.