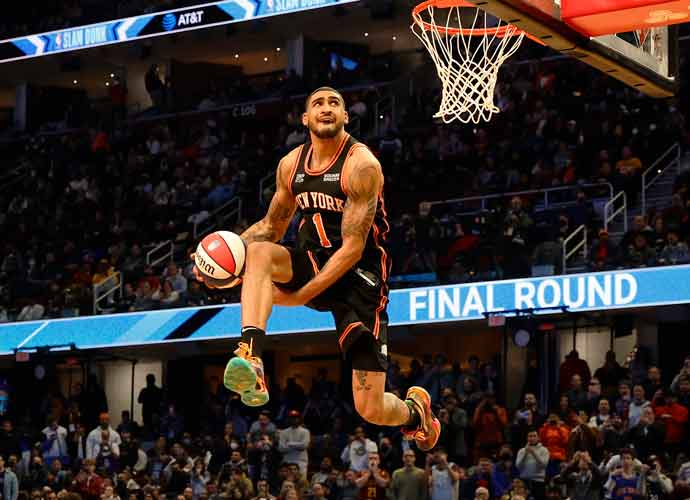 CLEVELAND, OHIO - FEBRUARY 19: Obi Toppin #1 of the New York Knicks dunks the ball during the AT&T Slam Dunk Contest as part of the 2022 NBA All Star Weekend at Rocket Mortgage Fieldhouse on February 19, 2022 in Cleveland, Ohio. (Photo by Tim Nwachukwu/Getty Images)

Last season as a rookie, the Knicks forward finished second in the NBA Slam Dunk Contest; this year, he defeated Golden State Warriors guard Juan Toscano-Anderson in the finals to take home the dunk crown.

Dating back to 1984 (sans 1998 and 1999), this year’s edition of the Slam Dunk Contest—Saturday night at Rocket Mortgage FieldHouse in Cleveland—was not well-received by the fans.

The NBA’s top stars have been eschewing the event in recent years, and the 2022 iteration featured, in addition to the two finalists, Orlando Magic guard Cole Anthony and Houston Rockets rookie guard Jalen Green.

There were plenty of missed dunks throughout the competition, and the judges’ scores reflected the efforts. None of the four participants received a score higher than 46 in the first round, and Toppin’s 47 on his final attempt—a between-the-legs slam—was…tops.

Obi Toppin goes through the legs and taps the backboard with the ball to WIN #ATTSlamDunk! 🏆#NBAAllStar #StateFarmSaturday pic.twitter.com/nsf39DHLEk

“I knew I had to come back for my revenge from last year, and I had fun doing it,” Toppin said. “And we had a lot of great dunkers here today. I’m glad I came out with the W.”

It wasn’t a Slam Dunk Contest win on the same level as Michael Jordan in 1988 or Vince Carter in 2000, some are saying, but Toppin is still a champion.

These dudes are shooting 30% from the floor in the dunk contest.