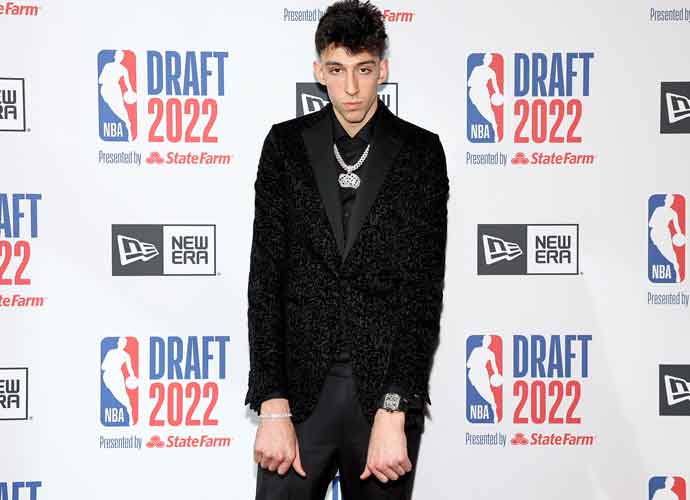 NEW YORK, NEW YORK - JUNE 23: Chet Holmgren poses for photos on the red carpet during the 2022 NBA Draft at Barclays Center on June 23, 2022 in New York City. NOTE TO USER: User expressly acknowledges and agrees that, by downloading and or using this photograph, User is consenting to the terms and conditions of the Getty Images License Agreement. (Photo by Arturo Holmes/Getty Images)

As the No. 2 overall pick in the 2022 NBA Draft, Chet Holmgren already came into the NBA with lofty expectations. What no one expected was that the 19-year-old would have such a dominating debut.

Playing against the Utah Jazz in a summer league matchup, Holmgren scored 23 points, grabbed seven rebounds, dished out four assists and had six blocks in 24 minutes played. The seven-footer also had four three-pointers and set the NBA Summer League record for blocks and becoming the first player in Summer League history to record at least five blocks and hit four three-pointers.
Holmgren was also extremely efficient while on the court. His 23 points came while shooting 7-9 from the field and 4-6 from three-point range. He was also perfect at the charity stripe going 5-5 from the line. Teammates Jalen Williams and Josh Giddey were also extremely solid as well with Giddey scoring 14 and dishing out 11 assists while Williams scored 17 points on 8-11 shooting.

Giddey who was the Oklahoma City Thunder’s sixth overall pick in the 2021 NBA Draft expressed his excitement about playing Holmgren after the game, “The hype that he came in with, the way he played tonight was big for us. Being a high pick like that, there’s a lot of pressure coming in, and he handled it as good as he could’ve. It makes my job easy playing with someone like him. He can stretch the floor, finish at the rim. He protects me, he’s got my back on the defensive end. So love playing with him. It’s been one game, and the chemistry’s only getting stronger,” he said.

“That’s a record?… Well I’m coming to break it again”@ChetHolmgren after setting the Utah Summer League Record for blocks with 6. pic.twitter.com/ygENsHwQ0l

In his postgame presser, Holmgren exuded confidence. When told of his new record, Holmgren laughed and said, “Only six? That’s the record? Oh, well, I’m coming to break it again.”

Holmgren also expressed his excitement to play with his new point guard in Giddey, “Shout out to my teammates for setting me up, talking to me, just putting me in position to be successful, “Shout out to this guy right here, double-double with assists. Great night for him, and that helped me out a lot.”

Holmgren has been one of the most highly-touted prospects of the last few years. The Gonzaga prospect averaged 14.1 points, 9.9 rebounds and 3.7 blocks per game in his lone season with the Bulldogs.