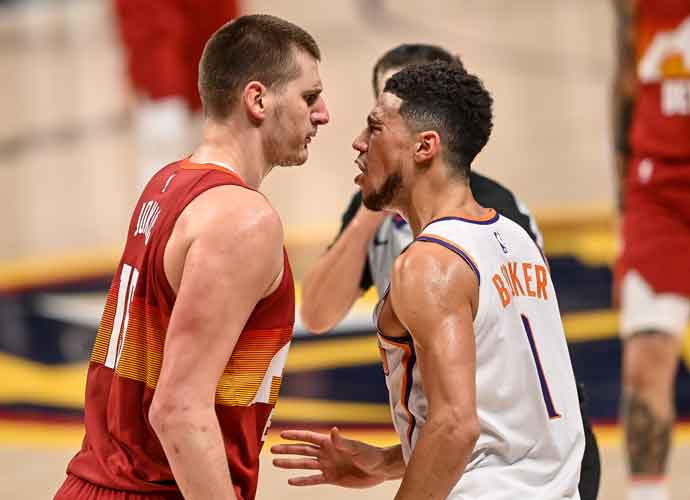 DENVER, CO - JUNE 13: Nikola Jokic #15 of the Denver Nuggets gets in the face of Devin Booker #1 of the Phoenix Suns after a play that would result in Jokic's ejection in Game Four of the Western Conference second-round playoff series at Ball Arena on June 13, 2021 in Denver, Colorado. NOTE TO USER: User expressly acknowledges and agrees that, by downloading and or using this photograph, User is consenting to the terms and conditions of the Getty Images License Agreement. (Photo by Dustin Bradford/Getty Images)

Denver Nuggets’ Nikola Jokic, who was recently named league MVP, was ejected after his hard foul on the Phoenix Suns’ Cameron Payne was ruled a flagrant foul 2. Jokic was ejected from Game 4 of the Western Conference Semifinal in the third quarter with the Nuggets down by eight points. Denver would go on to lose the game, which eliminated them from the postseason.

“I wanted to change the rhythm of the game,” Jokic said. “I wanted to give us some energy, maybe change the whistle a little bit, so I wanted to make a hard foul. Did I hit him, did I not hit him? We don’t know. So I say sorry if I did because I did not want to injure him or hit him in the head on purpose,” explained Jokic.

The Nuggets remained resilient until the final whistle, however, they were unable to complete a comeback without their star center. An outstanding performance by Chris Paul inspired the Suns to complete the 4-0 sweep of the Nuggets.

“I just didn’t feel like it warranted a flagrant 2 ejection because he’s making a play on the ball,” said Nuggets coach Michael Malone. “There’s marginal contact to Cameron Payne’s nose I believe. So I was shocked. I’m still a little bit shocked that they called a flagrant 2 and ejected the MVP on such a play.”

The foul was a result of Jokic’s frustration after he did not get a foul call on a shot. After a brief exchange with the referee, Jokic took his swipe at Payne.

Suns coach Monty Williams was also shocked by the call. “I didn’t really think it was anything malicious,” Williams said. “In those moments you have to regulate your emotions. That’s what we’ve been talking about all season long.”

On the broadcast, referee David Guthrie could be heard as he explained the decision, “After replay review, there is windup, impact and follow-through.” A flagrant foul 2 is defined as, “unnecessary and excessive contact committed by a player against an opponent.”

A scuffle unfolded after the foul as Suns star Devin Booker confronted Jokic and caused an altercation between the two teams. Booker was given a technical foul for the altercation.

“That’s all I said, just ‘What are you doing?'” Booker remarked. “It’s just an emotional play. I don’t think he meant harm by it. Just a frustration foul. It’s tough, just defending my teammate, that was it. I’ve played against the Joker multiple times. I know he’s not a malicious player.”

Jokic appeared to apologize to Payne after he was ejected.

After elimination, the Nuggets were left with no choice but to look forward to next season. “I’m not going to allow this series to define the season,” Malone said. “Hopefully next year we can find a way to stay healthy and be better and see where we can go.”

The Nuggets dealt with a devastating injury to key player Jamal Murray and still managed to finish third in the West and advance to the second round of the playoffs. Once Murray is healthy and paired with the current NBA MVP, Jokic, the Nuggets will have the potential to improve upon this impressive season in 2022.