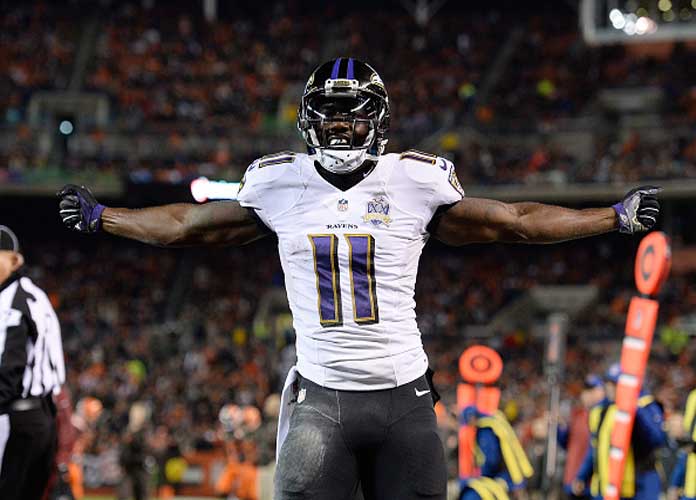 CLEVELAND, OH - NOVEMBER 30: Kamar Aiken #11 of the Baltimore Ravens celebrates his touchdown during the third quarter against the Cleveland Browns at FirstEnergy Stadium on November 30, 2015 in Cleveland, Ohio. (Photo by Jason Miller/Getty Images)

Wide receiver Kamar Aiken, who spent his past three seasons with the Baltimore Ravens, signed a one-year contract with the Indianapolis Colts on Tuesday, his agent David Canter announced.

Aiken, 27, led the Ravens with 944 yards on 75 receptions, and also scored five touchdowns in 2015. He struggled last season, however, recording just 29 catches for 328 yards and a scored. In his breakout 2015 season, Aiken lined up 78 percent of his snaps out wide and 18 percent in the slot, according to Next Gen Stats.

The wideout visited Indianapolis last week and spent Monday with the Seattle Seahawks before settling on his new team.

After going undrafted out of Central Florida, Aiken had stints with the Buffalo Bills, Chicago Bears and New England Patriots. Baltimore signed him to its practice squad in 2013.

In other NFL news, the Miami Dolphins have re-signed linebacker Kiko Alonso to a three-year contract extension worth $25 million, including $18.5 million guaranteed, which is added to the $3.9 million restricted tender he received this season, NFL Network’s Mike Garafolo reported Tuesday.

Alonso, 26, recorded 115 tackles, two interceptions and four passes defended in 2016, his first year with the Dolphins.

Miami acquired him in a trade with the Philadelphia Eagles after one disappointing season, when the linebacker was till recovering from a knee injury that erased his entire 2014 season.

The other major news this week was that free agent quarterback Josh McCown, who last played for the Cleveland Browns, signed a one-year with the New York Jets that includes $6 million guaranteed. McCown, who will be 38 in July, went 1-10 with the Browns over the last two seasons, during which he only played 13 games due to injuries. The Jets are the QB’s eighth NFL team in 15 years.

CLEVELAND, OH – NOVEMBER 30: Kamar Aiken #11 of the Baltimore Ravens celebrates his touchdown during the third quarter against the Cleveland Browns at FirstEnergy Stadium on November 30, 2015 in Cleveland, Ohio. (Photo by Jason Miller/Getty Images)