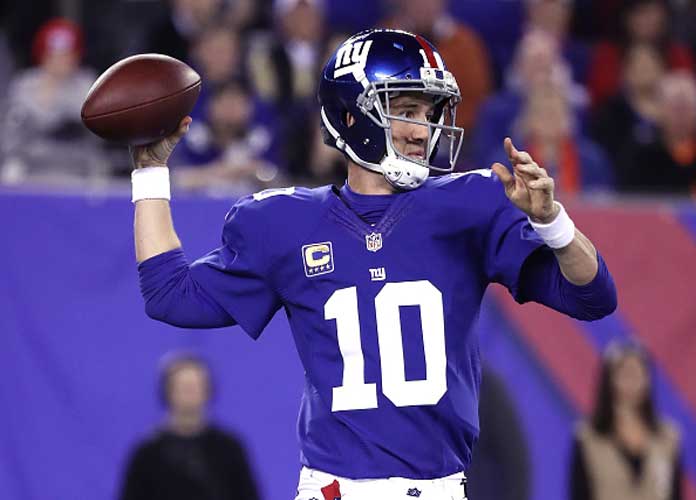 As far as most NFL fans were concerned up until recently, Eli Manning‘s time with the New York Giants seemed to be virtually over. However, it now appears the veteran quarterback could get to start for the G-Men’s matchup against the Eagles in Philadelphia on Monday night.

According to CBS Sports, Giants coach Pat Shurmur said two-time Super Bowl champion Manning — who will be 39 next month — is “very likely” to start for the team’s Week 14 game, given that rookie QB Daniel Jones has been sidelined with a high ankle sprain.

Eli Manning appears to be BACK as Giants starting QB.

Following a difficult start to this season, Manning was benched and replaced with Jones, a first-round draft pick out of Duke who delivered impressive performances in his first few NFL games. However, the Giants (2-10) are last in the NFC East and are now out of playoff contention for the third straight year. Many of their players, including second-year running back Saquon Barkley, have struggled lately. New York will undoubtedly face a tough challenge against the Eagles (5-7), who are second in the division and are fighting for a postseason spot. At the start of the season, Shurmur and Giants President and CEO John Mara insisted Manning would continue to be the team’s starter. Mara even controversially said he hoped Jones would never have to see a single snap in 2019.

Several NFL fans on Twitter quickly reacted to the announcement regarding Manning — who had one of his worst pro seasons last year — with a wide range of emotions, from surprise to mockery and concern. Here are some of the best reactions, which included GIFs and memes of pop culture references like baby Yoda from the upcoming film Star Wars: The Rise of Skywalker and Thanos from Avengers: Endgame.

When you look away from the #Giants for two seconds assuming they’ll never put Eli Manning in again: pic.twitter.com/D4xLoDR4eE

Manning returning to the Giants by saying, “I’m baaaack:”

Eli Manning showing up to start against the Eagles on #MNF pic.twitter.com/xSxH0nYLEd

Eli Manning to the Giants. pic.twitter.com/2Ho2AZeZ4y

With Daniel Jones being injured Eli Manning is backkkkkkkk for The Giants 😱😱 pic.twitter.com/MVCICah1LT

Eli Manning finding out the Giants want him to start games again and salvage this mess pic.twitter.com/BwW5E3VNWA

Other noted that Manning has a perfect career record as a starter for the Giants, thus seeming to imply there is no cause for worry.

Manning won’t be able to magically put the Giants in playoff contention at this point. However, this could very well be his last start for the team. Giants fans will have to hope he can at least deliver a strong performance and connect with the team’s receivers well. A touchdown pass or two and no interceptions would be great. The offensive line will need to protect Manning as much as possible, however. Here’s to hoping the younger Manning brother can ride off into the sunset with a great final game behind him.