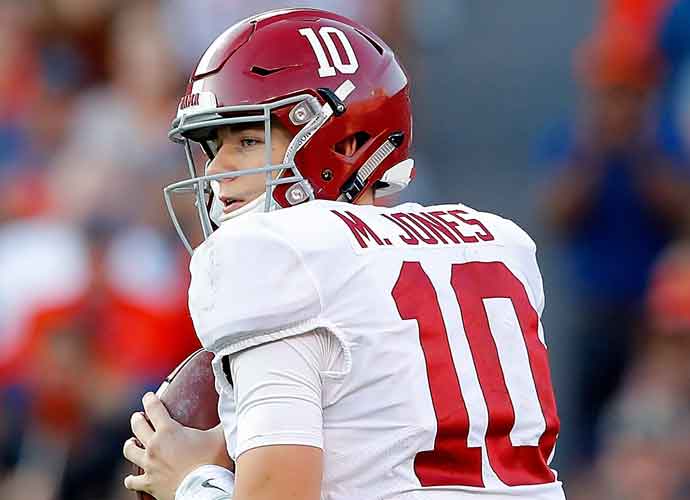 AUBURN, ALABAMA - NOVEMBER 30: Mac Jones #10 of the Alabama Crimson Tide looks to pass against the Auburn Tigers in the first half at Jordan Hare Stadium on November 30, 2019 in Auburn, Alabama. (Photo: Getty)

The New England Patriots drafted quarterback Mac Jones with the No. 15 pick in the 2021 NFL Draft.

From ’Bama to the ’Boro.

The Patriots drafting Jones is a sign that the team will officially begin the long-delayed post-Tom Brady rebuild. After losing Brady, the team attempted to remain competitive by signing Cam Newton.

At first, it was looking bleak for the Patriots, who wanted to pick Jones, but were unsure if they would get the opportunity. The San Francisco 49ers were rumored to be heavily interested in drafting Jones, but they opted for North Dakota State’s Trey Lance with the third pick. The danger did not stop there because the Chicago Bears could have taken Jones, but they drafted Justin Fields by trading up to the No. 11 pick.

For Jones, it was a dream come true to be drafted by New England. “At the end of the day, you kind of want to get the right fit,” Jones told reporters. “I feel like, secretly, I really wanted to go to the Patriots all along. So I’m actually really happy it happened.”

While it is the start of the post-Brady era, Bill Belichick has said that Newton will remain the team’s starting quarterback. Currently, the Pats roster Newton, 2019 fourth-round pick Jarrett Stidham, practice squad player Jake Dolegala and Jones as the team’s quarterbacks. “Cam’s our quarterback,” Belichick stated. “Whatever time Jarrett or Mac are ready to challenge and compete, then we’ll see how that goes.”

Regardless of who is the team’s starter, Belichick is ready to work with the rookie quarterback. “I look forward to working with him,” Belichick said of Jones.“ He’s a smart kid, he’s been in a system that’s similar to ours. We’ve had a lot of good conversations with him. I think he’ll be able to process the offense. It’s obviously going to take a lot of time.”

This is a feeling that is shared by Jones, who is prepared to learn. “It’s his show, and I’m just there to support him and help out the team in whatever way I can,” Jones said of Newton.

While Newton will more than likely begin the 2021 season as New England’s starting signal caller, if the team struggles, don’t be surprised if Jones earns his way to a few snaps here and there.