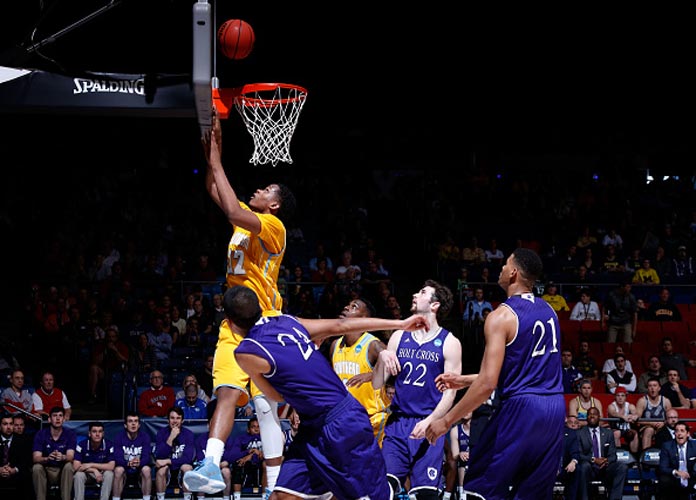 Caption:DAYTON, OH - MARCH 16: Jared Sam #12 of the Southern University Jaguars goes up against the Holy Cross Crusaders during the first round of the 2016 NCAA Men's Basketball Tournament at UD Arena on March 16, 2016 in Dayton, Ohio. (Photo by Joe Robbins/Getty Images)

Following victories by Holy Cross and Michigan on Wednesday to close out the First Four games, the field of 64 in the NCAA Tournament is set. Wichita State and Florida Gulf Coast breezed their way into the field just one day before.

The Holy Cross Crusaders (15-19) defeated the Southern Jaguars 59-55 to secure their first tournament win since 1953. The Crusaders went 5-13 in league play and had only 10 wins overall, but then earned four straight road victories to make the First Four. Holy Cross led by as much as 12 points in the first half.

The Michigan Wolverines (23-12) and the Tulsa Golden Hurricane also put on a highly-contested matchup.  The Wolverines held Tulsa to just 20 points in the first half. Tulsa came back to tie the game within the first three minutes of the second half, and the rest of the game remained close.

Zak Irvin put up a three with 55 seconds remaining to win the game for Michigan, as the Wolverines pulled away in the last minute for a 67-62 victory.

Here are the first-round brackets for each conference: (South, East, West, Midwest).

DAYTON, OH – MARCH 16: Jared Sam #12 of the Southern University Jaguars goes up against the Holy Cross Crusaders during the first round of the 2016 NCAA Men’s Basketball Tournament at UD Arena on March 16, 2016 in Dayton, Ohio. (Photo by Joe Robbins/Getty Images)