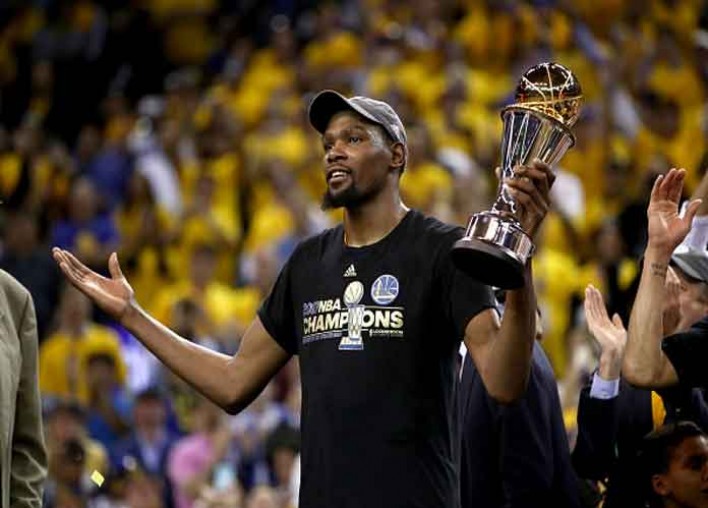 With the NBA season’s finale between the Toronto Raptors and Golden State Warriors now in place, the rest of the league’s chance to wind up playing for the Larry O’Brien trophy during next year’s campaign moves closer. NBA free–agency provides players with opportunities to test the market, trying on numerous jerseys and eventually deciding which one fits best. With that, teams trip over each other, all hoping to lure in top tier talent, hopefully transforming their rosters into a ticket selling and championship acquiring bunch. With this storm forecasted to move in July 1, numerous free agents continue to draw attention amid speculation regarding where they might take their talents prior to next year’s campaign.

Already famous for making perhaps the sport’s most controversial free agency decision, two–time finals MVP Kevin Durant will attempt to draw less scrutiny with his future decision this summer, as the star allegedly plans to opt out of his contract. Emerging as a favorite to land the Warrior’s forward stand the New York Knicks, poised to add young talent after acquiring the third pick in this years draft, while also flooded with cap space. NBA sources continually add to the storyline, as Colin Cowherd and Stephen A. Smith have both expressed their confidence frequently regarding Durant’s potential transition to the big apple.

“An NBA veteran player that’s very, very connected told me 15 minutes ago: KD to the Knicks is 100% done and he’s made calls to other players.” — @ColinCowherd pic.twitter.com/1dhaaa7F29

While a month and a half still exists for Durant to ponder his career’s next step, New York remains the destination most presume Durant will punch his ticket for. Other teams tied to Durant such as the Brooklyn Nets, Los Angeles Clippers, and Durant’s current team the Golden State Warriors remain in the mix as well.

Celtics point guard Kyrie Irving stands as another NBA champion poised to sport new threads come next season. After publicly voicing his potential non–commitment to Boston this year, most executives will expect a fair shot at Irving once free agency commences. The New York Knicks remain strong candidates as well to sign Uncle Drew, potentially pairing him with Durant. However, the Knicks’ cross–town rival the Brooklyn Nets hold the greatest odds to acquire Irving, as their cap space bodes well for the up and coming franchise leading up to free agency. Not to be forgotten, the Los Angeles Lakers likely plan to draw in Irving this summer, once again pairing Irving with LeBron James. Gravity pulling Irving into L.A. continues to strengthen, as an Instagram post depicting Irving wearing the purple and gold received a like from King James, which generated excessive commotion throughout the NBA community.

Kawhi Leonard plans to test free agency as well once the Raptors conclude their current playoff run. The Los Angeles Clippers appear as a likely candidate to add Leonard, as the superstar forward mentioned the Clippers as a favorable destination throughout his trade request saga in San Antonio. Stacked with countless role players poised to complement Leonard’s game, Los Angeles will most likely divert most of their attention this summer toward the former finals MVP.

After requesting a trade from Minnesota, 76ers forward Jimmy Butler rounds out the free agent class. Butler proved his value once assembling with the Sixers this post season, averaging 19.4 points per game and hitting memorable clutch shots. While the Sixers stand as a primary candidate to re–sign Butler, the Brooklyn Nets remain in the mix as well, as reports suggest Brooklyn plans to pursue Butler heavily.