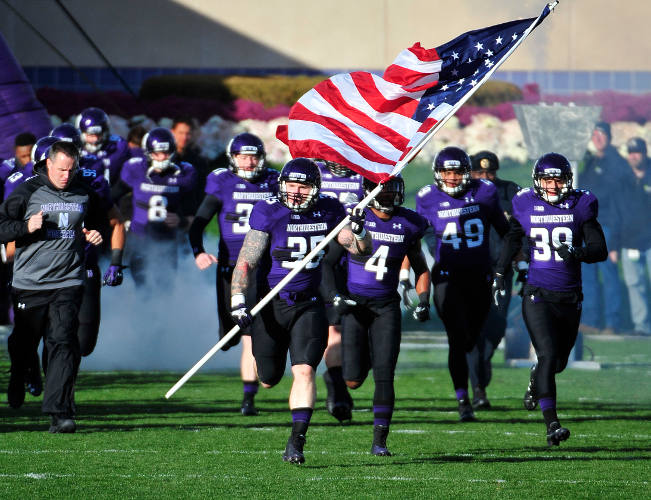 Tom Hruby #35 of the Northwestern Wildcats leads the team on the field against the Michigan Wolverines on November 8, 2014 at Ryan Field in Evanston, Illinois. (Photo by David Banks/Getty Images)

In a landmark decision a year and a half after its initial conception, the National Labor Relations Board has ruled that Division I football players at Northwestern University cannot unionize thus dismissing the players petition to do so.

This is a major win for the university, as it opposed its players from being viewed as employees which could have led to their engagement in collective bargaining with Northwestern. Had the decision swayed in favor of the players, student-athletes would have been considered employees.

In a statement of conclusion regarding the case, the Labor Relations Board wrote that, “After careful consideration of the record and arguments of the parties and amici, we have determined that, even if the scholarship players were statutory employees (which, again, is an issue we do not decide), it would not effectuate the policies of the (National Labor Relations) Act to assert jurisdiction. Our decision is primarily premised on a finding that, because of the nature of sports leagues (namely the control exercised by the leagues over the individual teams) and the composition and structure of FBS football (in which the overwhelming majority of competitors are public colleges and universities over which the Board cannot assert jurisdiction), it would not promote stability in labor relations to assert jurisdiction in this case.”

Had this case won, students of all sports across the nation would be appealing to the NCAA to be treated as employees. The only restriction that would apply in this case, though, is that only student-athletes at private universities would have this right, while those at public schools would have to petition through state boards.

The argument for unionization, is elucidated by NLRB regional director Peter Sung Ohr’s prior 2014 statement saying that, “it is clear that the players are controlled to such a degree that it does impact their academic pursuits to a certain extent.”