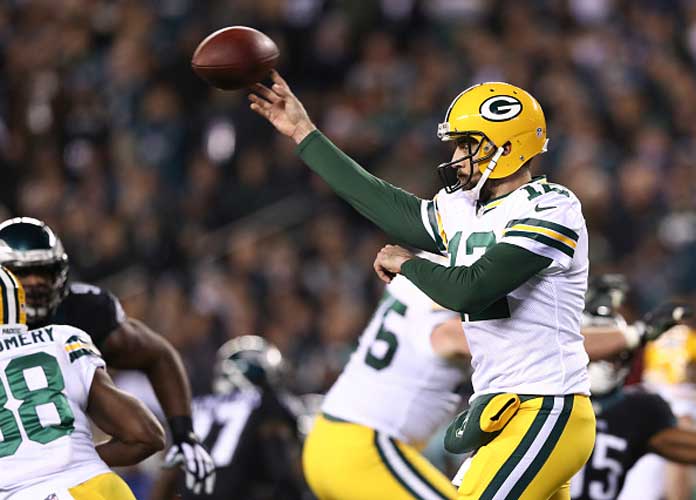 Aaron Rodgers, a lightning rod for controversy these days, had strong words for Hub Arkush, the “bum” MVP voter who said that he would not cast his vote for the Packers quarterback because he’s “the biggest jerk in the league” and “a bad guy.”

“I think he’s a bum,” Rodgers said Wednesday. “I think he’s an absolute bum. He doesn’t know me. I don’t know who he is; no one knew who he was, probably, until yesterday’s comments. I listened to the comments, but to say he had his mind made up in the summertime, in the offseason, that I had zero chance of winning MVP, in my opinion, should exclude future votes. His problem isn’t with me being a bad guy or the biggest jerk in the league. He doesn’t know me.”

The Chicago-based Arkush is the editor of Pro Football Weekly and contributes to other Windy City-area media. He made the comments on Chicago radio station 670 The Score and has since said he regrets saying what he said.

“The only thing I can do going forward is respect what I failed to respect last night and just not talk about it anymore until after the awards have been given,” he said Wednesday. In a column, Arkush wrote that he “made a terrible mistake” with his remarks and that “there is no one else to blame, and I am here to try and apologize.”

“His problem is I’m not vaccinated,” he said. “So, if he wants to go on a crusade and collude and come up with an extra letter to put on the award just for this season and make it the Most Valuable Vaccinated Player, then he should do that. But he’s a bum and I’m not going to waste any time worrying about that stuff. He has no idea who I am. He’s never talked to me in his life.”

Rodgers—who missed a game, which the team lost, because he tested positive for COVID-19 and had to quarantine for 10 days—recently acknowledged that some voters might hold his vaccine viewpoint against him.

“I don’t think you can be the biggest jerk in the league and punish your team and your organization and your fan base the way he did and be the most valuable player,” Arkush said Tuesday on The Score. “Has he been the most valuable on the field? Yeah, you could make that argument, but I don’t think he is clearly that much more valuable than Jonathan Taylor or Cooper Kupp or maybe even Tom Brady. So from where I sit, the rest of it is why he’s not gonna be my choice.

“I just think that the way he’s carried himself is inappropriate. I think he’s a bad guy, and I don’t think a bad guy can be the most valuable guy at the same time.”

Packers coach Matt LaFleur said on-field play is the only thing that should be factored in.

“I don’t know what else could factor into it than how somebody goes out and performs on a weekly basis,” LaFleur said. “If people are going to judge people for differences of opinion or things that they have no idea what the heck they’re talking about, then I think that just kind of discredits that award. I think we hold that award in high regard. I think most do. And I think it’s an absolute privilege to be able to vote for that award. To consider anything else outside of what you see when that player’s out there playing I think is a disservice to everybody.”

The Packers (13-3) managed to secure the No. 1 seed in the NFC playoffs with one game remaining. Rodgers has thrown 35 touchdown passes and only four interceptions for 3,977 yards while completing 68.6% of his passes.

Aaron Rodgers Says He Plans To Retire With Green Bay