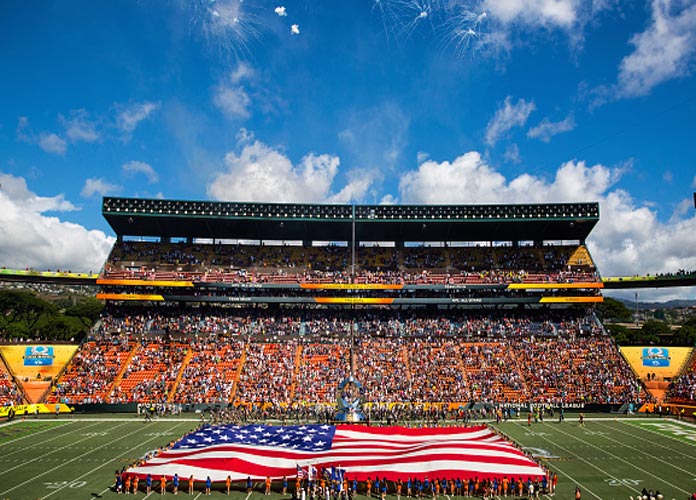 HONOLULU, HI - SUNDAY, JANUARY 31: A general view of Aloha Stadium during the sining of the National Anthem before the start of the 2016 NFL Pro Bowl at Aloha Stadium on January 31, 2016 in Honolulu, Hawaii.Team Irvin defeated Team Rice 49-27. (Photo by Kent Nishimura/Getty Images)

Covid-19 has now wreaked havoc on the third college football bowl game in the last day or so, as the Barstool Arizona Bowl was canceled Monday night.

Originally scheduled for Friday in Tucson, Arizona, the game was set to feature Boise State and Central Michigan. However, the former announced they couldn’t make it due to a Covid outbreak on the team. Soon thereafter, organizers of the bowl pulled the plug.

Friday’s Tony the Tiger Sun Bowl quickly gobbled up Central Michigan, and now the Chippewas will sub in for the University of Miami—also sidelined by a Covid outbreak—in El Paso and play in the Sun Bowl, one of the nation’s four oldest bowl games, having been played since 1935.

Central Michigan will now face Washington State at 10 a.m. MT on Friday in El Paso. Jack Dickert coaches the Cougars after he took over mid-season after Nick Rolovich was fired for refusing to get the Covid vaccine.

“We are grateful for the diligent work of the Sun Bowl Association, the Pac-12 Conference, the Mid-American Conference, and Central Michigan University to ensure the 2021 Tony the Tiger Sun Bowl will be played,” Washington State Athletic Director Pat Chun said.

Prior to the Sun Bowl’s ixnaying on Sunday, the Military Bowl (Boston College) and Wasabi Fenway Bowl (University of Virginia) were both called off because of Covid complications.

Also, the Hawaii Bowl (University of Hawaii) was called off last Thursday on the eve of the game due to COVID and injuries. Last week, the TaxSlayer Gator Bowl (Texas A&M) was threatened before Rutgers filled the spot.

The College Football Playoffs semifinals are set for Friday, with the championship game scheduled for January 10 in Indianapolis, Indiana.

College football officials said that, due to Covid issues, teams could advance to the final or one be declared a champion by forfeits.

Read more about:
college bowl games College Football COVID-19
Listen to the uInterview Podcast!
Get the most-revealing celebrity conversations with the uInterview podcast!