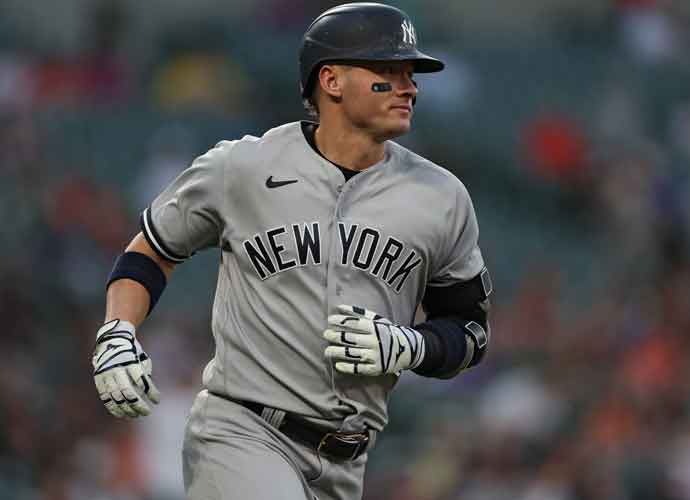 BALTIMORE, MARYLAND - MAY 16: Josh Donaldson #28 of the New York Yankees runs against the Baltimore Orioles at Oriole Park at Camden Yards on May 16, 2022 in Baltimore, Maryland. (Photo by Patrick Smith/Getty Images)

The MLB has suspended New York Yankee’s third baseman Josh Donaldson for one game for his “inappropriate” comments towards Chicago White Sox shortstop Tim Anderson. According to reports, Donaldson referred to Anderson as “Jackie” during the first inning of the Yankees-White Sox matchup on May 21. Donaldson, who is white, said the comment was a reference to a 2019 Sports Illustrated article in which Anderson, who is black, referred to himself as “today’s Jackie Robinson.” Donaldson faced immediate backlash for the comments, with White Sock manager Tony La Russa calling the comments “racist.”

MLB Senior VP for on-field operations, Michael Hill said in a statement, “There is no dispute over what was said on the field. Regardless of Mr. Donaldson’s intent, the comment he directed toward Mr. Anderson was disrespectful and in poor judgment, particularly when viewed in the context of their prior interactions. In addition, Mr. Donaldson’s remark was a contributing factor in a bench-clearing incident between the teams, and warrants discipline.”

Donaldson has continuously rejected any claims of malicious intent with his comments, stating that he has joked about the reference in the past with Anderson. Anderson however voiced his displeasure at the comments in a post-game presser. “I wasn’t really going to bother nobody today, but he made the comment and you know it was disrespectful and I don’t think it was called for. It was unnecessary,” he remarked to the media. Donaldson and Anderson have a hostile history, however. As recently as May 13, benches cleared after Anderson appeared to shove Donaldson after a hard tag. Donaldson said that he was “trying to defuse” any lingering tension when the players crossed paths early in the game when the comment was made. Additionally, the White Sox have gotten into altercations in the past involving the third baseman.

The former AL-MVP says he plans to appeal the suspension, but many pundits around the league believe that one game isn’t enough. White Sox pitching coach, Ethan Kantz, took to Twitter to voice his displeasure at the “ridiculousness” of it all. Kantz, in a now-deleted tweet, expressed, “Just one game. We all saw his malice at third a week ago, then this comment with the ridiculous excuse that followed. What’s the point or message behind a 1 game suspension? This is incredibly disappointing and plain frustrating.”

However, Yankees manager Aaron Boone says he disagrees with the league’s decision, saying that the incident did not warrant a suspension. As of now, Donaldson remains on the Covid-19 injured list and will serve his suspension once the appeals process is over.