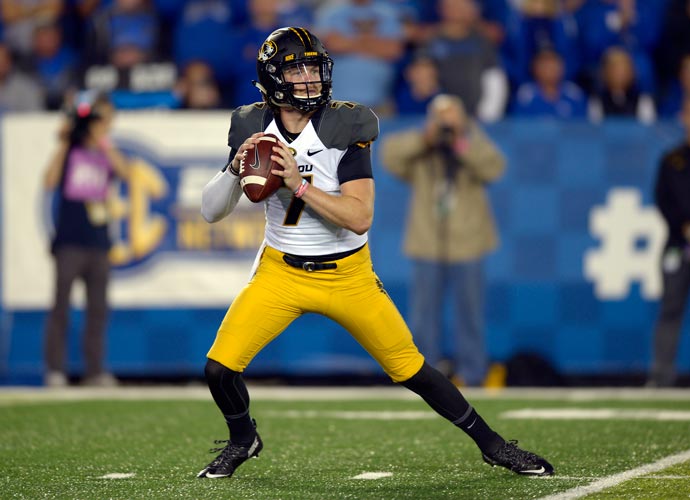 LEXINGTON, KY - SEPTEMBER 26: Maty Mauk #7 of the Missouri Tigers drops back to pass against the Kentucky Wildcats at Commonwealth Stadium on September 26, 2015 in Lexington, Kentucky. (Photo by Dylan Buell/Getty Images)

“It is with a heavy heart that I come to term with the fact that I will not be a part of this great University of Missouri Athletic organization. There are no words to describe my disappointment,” Mauk stated in the note. “While I cannot provide you with specifics about my future, there is one thing that I am very sure of–How incredibly thankful I am for the overwhelming support I have felt from the Athletic Department, the coaches, academics, my teammates, and most of all from the fans. I will and cannot tell you how much this support has meant to me and how thankful I am. Please know that my intent was never to bring any harm to the University or football program. I will continue to make myself the best I can be. I wish the Mizzou football program the best.”

Mizzou head coach Barry Odom explained in a statement that the decision to dismiss Mauk was a result of the QB’s “failure to live up to expectations in recent weeks.”

The cause of all the uproar regarding Mauk’s inappropriate behavior in a video that went viral earlier in the week. In the video, Mauk appears to be snorting a line of white powder presumed to be cocaine. However, the video may in fact be a few years old, according to FOX Sports college football writer Bruce Feldman.

Mauk had previously been suspended twice from the Tigers prior to his dismissal. He ended his career at Missouri with 4,373 passing yards, 42 touchdowns and 19 interceptions.

PHOTO: LEXINGTON, KY – SEPTEMBER 26: Maty Mauk #7 of the Missouri Tigers drops back to pass against the Kentucky Wildcats at Commonwealth Stadium on September 26, 2015 in Lexington, Kentucky. (Photo by Dylan Buell/Getty Images)