McKayla Maroney Bio: In Her Own Words - uSports.org 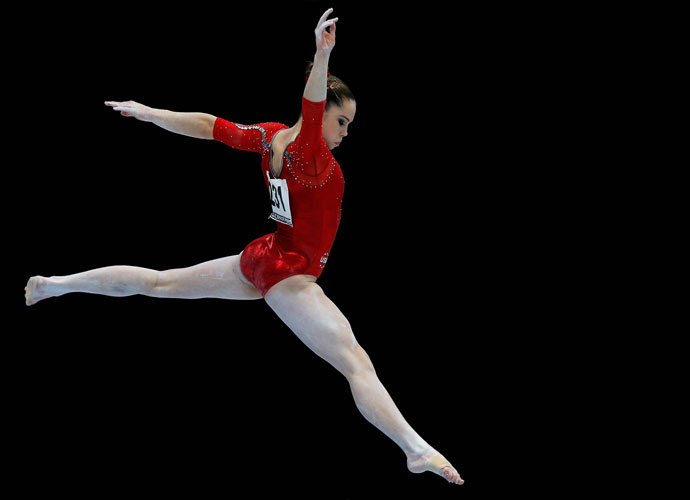 McKayla Maroney Bio: In Her Own Words

McKayla Maroney was born in Aliso Viejo, Calif., to Mike and Erin Maroney, on December 9, 1995. From the beginning, athletics were in her blood; he father was a quarterback at Purdue University and her mother was a figure skater. She began gymnastics at the age of two when her mother sought a way to reign in her non-stop energy. She naturally excelled at the sport and, before long, was competing in junior competitions.

At age 13, she competed in the 2009 Visa Championships in Dallas, Texas. Not only did she land an Amanar in the competition, but she finished seventh overall and third in the vault final. Maroney continued to improve the next year. In the 2010 CoverGirl Classic, she placed seventh in the all-around competition with a score of 55.650; in August, she made her return to the Visa Championships looking to improve on her previous marks. This time, she finished third in the all-around competition before taking home first place in the vault finals and fourth place in the floor exercise. Following a key performance for the United States in the 2010 Pan American Championship, she was ready to join the senior ranks in 2011.

Even at the next level, success continued to come. Maroney took home the all-around title at the City of Jesolo Trophy in Jesolo, Italy. On the back of that victory and another strong Visa Championships — she placed second in the all-around competition and first in the vault–she headed to the World Artistic Gymnastics Championship in Tokyo, Japan. Not only did her strong performances help the United States take the first place prize, but she individually the vault final with a score of 15.3. Her career hit a bump in 2012, however, as Maroney fell during warm-ups at the Visa Championships in St. Louis, Missouri; she was taken to the hospital and diagnosed with a concussion and a nasal fracture. Despite being forced to miss a week of training, she filed a petition to compete in the United States Olympic Trials. Her request was granted. But things didn’t immediately get easier just because she was in the competition. After falls on both the beam and the bars, she only placed seventh in the all-around competition. The finals, though, were a different story. She placed first on vault and fifth on floor exercise and, when everything was said and done, she was named the first member of the Olympic squad.

From then on, her life was focused chasing the gold. “I go to a chriopractor and do massages,” she told uSports just before the 2012 Olympic Games. “Nutrition is very important; you have to be healthy and get enough energy for the day to accomplish your tasks at the gym. You have to be healthy that’s one of the most important things.” But preparation was not purely physical. On the biggest stage, mental sharpness is just as important. “You just wake up, relax a little bit and try to stay in the zone,” Maroney said of her competition routine. “Then you get ready, put your leotard on, do your hair and make-up and listen to music. Just try to stay in that zone.” At the London Olympic Games, Maroney helped the United States qualify in first place despite aggravating a previous break in her foot; she also qualified for the individual vault finals in first place. In the team finals, she put in a record-setting performance to help the United States take home the gold medal. Her execution average of 9.733, the highest execution score at an Olympics or world championship under the new scoring system. Her top focus, however, was on a different prize. “I know I really want to get the Gold Medal for vault because I’ve been working so hard for that,” she told uSports before the Games began. “I really want to have that Gold Medal.” Fate, however, would intervene and a fall during her second fault meant she only took home silver. On the podium, she was spotted with her lips pursed in disappointment. The picture became the genesis of a meme, known as “McKayla is not impressed” and she was photoshopped into numerous impressive situations. She even took a photo with President Barack Obama in which they both made the famous face.

RT @McKaylaMaroney Did I just do the Not Impressed face with the President..? // Yes. pic.twitter.com/4BkKAfaV

But fortunes soon changed as Maroney was once again injured in September. Dismounting from the uneven bars, she landed awkwardly; an MRI would reveal a fracture in her left tibia. It would require screws to repair it and Maroney needed to wear a leg immobilizer to keep the leg straight.

When she returned to competition in 2013, she attempted to make up for lost time. In her first event since the Olympics at the 2013 Secret U.S. Classic, she placed first on vault with her highest scores ever in the event. Then, at the Procter & Gamble World Championships [formerly the Visa World Championships], she won gold in both the vault and floor exercise. Maroney then rounded out the year at the 2013 World Artistic Gymnastics Championships in Antwerp, Belgium, where she became the first ever American woman to successfully defend her world title on the vault.

In March 2014, she underwent surgery on her knee, which sidelined her indefinitely. Then in April 2015, she made a YouTube video revealing that she struggled from adrenal fatigue, which led to depression and anxiety issues. It is unknown if she will return to the sport.

Despite being sidelined from the sport, Maroney can still pursue her other passion. “After gymnastics, I know that I want to be an actress,” she told uSports. “That sort of thing seems really fun for me.” She appeared on several episodes of CW’s comedy-drama Hart of Dixie as Tanya from 2012-2015. She also made a guest appearance on Bones in 2013.

McKayla Maroney Bio: In Her Own Words News