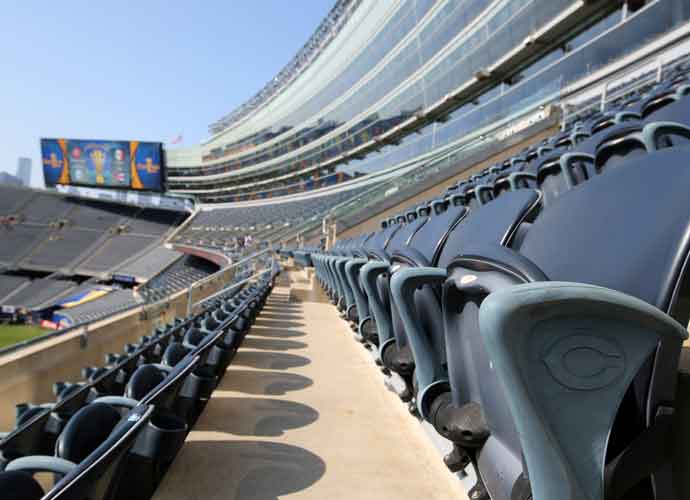 CHICAGO, USA - JULY 09: Seats with the Chicago Bears logo on them in the Soldier Field Stadium before the CONCACAF Gold Cup match between Trinidad & Tobago and Guatemala at Soldier Field on July 9, 2015 in Chicago, Illinois. (Photo by Matthew Ashton - AMA/Getty Images)

The Chicago Bears took steps to potentially move on from their long-time home of Soldier Field, and the mayor is not happy about it. Soldier Field has been the home of the Bears since 1971, but that could now change.

Recently in a statement, team president Ted Phillips revealed that the franchise made a bid for land to use for the construction of a new stadium.

“We recently submitted a bid to purchase the Arlington International Racecourse property,” Phillips said in a statement. “It’s our obligation to explore every possible option to ensure we’re doing what’s best for our organization and its future. If selected, this step allows us to further evaluate the property and its potential.”

The 326-acre land is currently used as the Arlington Park race track and is 35 miles outside of Chicago. The owner of the track, Churchill Downs Inc., is selling all of the property. The company expects a new buyer to tear down the race track and to re-develop the site.

It will be costly for the team to stay at Soldier Field. The stadium was built in 1924, and only seats 61,500. Due to spatial constraints, it is unlikely the stadium could expand its seating. Renovating the stadium would be very costly, and the team seems to feel better about the prospect of building a new stadium.

However, the team currently has a lease to play at Soldier Field for the next 13 seasons.

One person that did not take kindly to the possibility of the Bears moving from Soldier Field is Chicago mayor Lori Lightfoot. “As a season-ticket holder and longtime Bears fan, I am committed to keeping the ‘Chicago’ name in our football team,” Lightfoot said. “And like most Bears fans, we want the organization to focus on putting a winning team on the field, beating the Packers finally, and being relevant past October. Everything else is noise.”

On the Bears bid to buy Arlington Racecourse… pic.twitter.com/FE6mBHB50U

The mayor then accused the team of using the bid as a withholding tactic to force the city to provide the funds to renovate Soldier Field.

“As part of the city’s recovery, many organizations are doubling down on their commitment to Chicago, and we expect the Chicago Bears to follow suit,” Lightfoot said. “The Bears are locked into a lease at Soldier Field until 2033. In addition, this announcement from the Bears comes in the midst of negotiations for improvements at Soldier Field. This is clearly a negotiating tactic that the Bears have used before.”

The winner of the bid has not been announced yet.