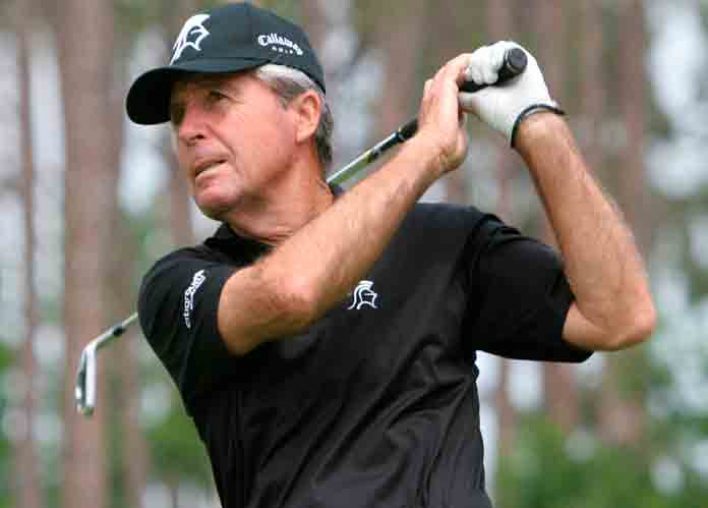 Description: English: A picture of Mr. Player on the follow though of a shot. Date 20 July 2008 Source: Own work Author: Lady 11390 Permission (Reusing this file): No (Wikipedia)

The Legends Tee Off

The 2019 Masters officially began Thursday, with the honorary starters from both sides kicking off the tournament with their opening tee shots. The annual tradition for one of the biggest competitions in the PGA, Augusta National has become a favorite for patrons in attendance on Thursday.

Many fans were happy to be watching legends of the game trot out to the first half in the early morning to offer a couple warmup swings and light jokes.

Ladies and gentlemen, the 2019 Masters is under way.

Gary Player helps get the tournament started with his honorary tee shot. pic.twitter.com/gS8uhDMyS7

Jack Nicklaus and Gary Player are the two Honorary Starters for the event. They will no longer joined by Arnold Palmer since his passing back in September 2016. The golf world still mourns this, as it feels like something’s missing from the competition. Palmer’s passing brought pain to many.

On the eve of #themasters, @jacknicklaus looks back on his 60 years at Augusta National. pic.twitter.com/OqKiFTqylt

The following year’s start in 2017 provided a time and a place for Augusta to take a moment and specifically honor Palmer, and his memory and achievements continue to be celebrated to this day throughout golf. Since Nicklaus and Player are set to be the ones to hit the first tee, they carry on the responsibility of representing legends from the past on the first tee.

Up first was Player, golf’s great and official global ambassador. After wiping away a couple of tears off his face during the introductions, he gracefully approached the ball with good spirits. While promoting his new driver, he delivered with a shot down the fairway and celebrated with a spry and happy leg-kick that thrilled the patrons and other fans in attendance.

Only a few minutes before the Honorary starters tee off at the Masters and Gary Player is currently warming the crowd up by demonstrating his karate moves. He truly is the Greatest Showman. pic.twitter.com/mvbpupOqEc

.@JackNicklaus‘ most memorable moment at the Masters came on a Wednesday. pic.twitter.com/3C1w7o58Qe

Nicklaus was up next, introduced by chairman Fred Ridley, who got the crowd going by mentioning Nicklaus’ unprecedented major and Masters success. With 18 majors already won and six green jackets, Nicklaus is the benchmark for any of the active golfers chasing greatness. After making a joke for the patrons, Nicklaus took a swing that was met with applause from others.

Age ain’t nothing but a number

Player was even able to convert a hole-in-one, a vey impressive feat for a man who’s in his 80s.

Golf is a sport for all ages.