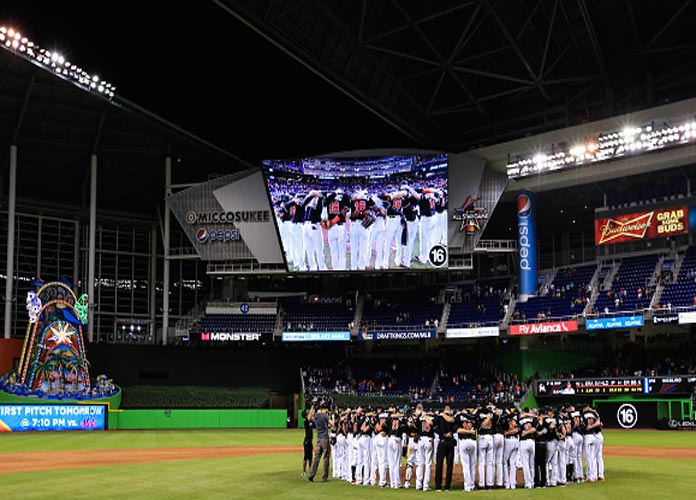 Though he wasn’t physically present, Jose Fernandez was the name on everyone’s mind at Marlins Park on Monday night, and Miami’s team fed off the energy.

Dee Gordon kicked things off, honoring his friend and teammate by taking a pitch in the right-handed batter’s box before turning around to his natural left-handed side and blasting a tearful leadoff homer in the first. Gordon also pointed up to the sky after going 4-for-5 and driving in two runs to pair with Justin Bour’s three hits to help lead the Marlins to a 7-3 victory over the New York Mets in Miami.

The game was bookended by tributes to Fernandez, the 24-year-old Cuban Marlins pitcher who died in a boating accident early Sunday morning.

The game began with a chilling pre-game ceremony, which featured a lone trumpeter playing the drawn-out notes of “Take Me Out to the Ballgame.” The Marlins held a moment of silence. After this and a video tribute for Fernandez, both teams, rushed to the infield, where Mets players offered hugs and handshakes to their opponents. Mets left fielder Yoenis Cespedes, a Cuban and close friend of Fernandez, remained on the field to embrace several Miami players at length.

“This was bigger than baseball.” TC talks about the impact José Fernández had on baseball and in the community. #Mets pic.twitter.com/qLnryS87rP

Adam Conley made the start in place of Fernandez. The left-hander was appearing in his first major league game since he went on the disabled list on Aug. 14 with left third finger tendinitis. Conley worked just three scoreless innings and was removed after 45 pitches.A.J. Ramos closed out the game in a non-save situation.

The Marlins jumped out quickly against Mets starter Bartolo Colon, who worked just 2 1/3 innings, giving up seven runs on eight hits. The Mets, after falling behind by seven runs, got on the board in the fifth on Asdrubal Cabrera‘s two-run double off Brian Ellington. New York also loaded the bases with one out in the sixth inning, but Hunter Cervenka struck out Lucas Duda looking and right-hander Dustin McGowan retired pinch-hitter Kelly Johnson on a fielder’s choice to short.

Gordon had a season-high four hits, and Bour recorded his first career triple.

Marlins reliever David Phelps, who worked a clean seventh inning, slumped behind the mound and touched the painted No. 16 (Fernandez’s number) before heading to Miami’s dugout. Ramos retired Curtis Granderson to seal the win and the Marlins players gathered around the mound, all wearing Fernandez’s jersey, to honor their fallen teammate. The Marlins, who decided the No. 16 will never be worn by another franchise player again, then placed their hats on the mound.

“I’ve had nothing but hard feelings, strong feelings, for all those guys across the diamond since yesterday, since I heard the news,” Mets catcher Travis d’Arnaud said. “I really couldn’t imagine what it would be like to lose any one of my brothers here in the dugout. It was a really hard game today to even step on the diamond and see all of them.”

Marlins manager Don Mattingly said watching Fernandez’s loved ones reminded him of his own personal loss, which he suffered at a very young age.

“Watching his mom and grandmother yesterday reminded me of my brother, who was killed at 23, when I was like 6 years old,” Mattingly said. “And they shielded me. I was not really a part of all that, what was going on. But now I know what was going on. So I knew the pain.”

Collins embraced Mattingly after the pre-game moment of silence.

Mattingly continued to speak emotionally at the postgame news conference.

“I think it will get easier for us, as time goes, to play, and there are things you see,” he said. Myself, driving today, you come across that bridge and turn toward the parking lot, and there’s a big 16 on the building out there, overnight. And you get choked up. I think it’s going to keep happening to all of us, over time. I just keep thinking about the families. For us, it’s one thing. For them, it’s totally different.”

The two teams will face off again for the second game of their three-game series at Marlins Park on Tuesday night. Mets right-hander Noah Syndergaard (13-9, 2.63 ERA) will return to the mound for the first time since coming down with a case of strep throat last week. Marlins righty Tom Koehler (9-12, 4.02 ERA) will be seeking his first win since Aug. 9, having gone without a victory in eight straight starts.