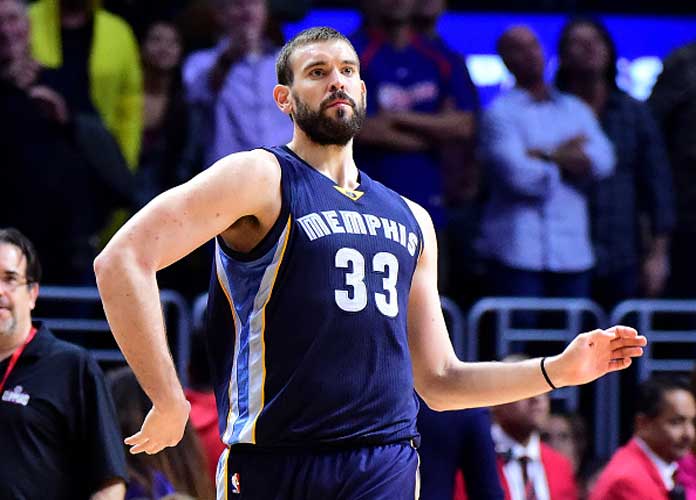 LOS ANGELES, CA - NOVEMBER 16: Marc Gasol #33 of the Memphis Grizzlies celebrates his three point basket for a lead over the LA Clippers during the final seconds of the fourth quarter at Staples Center on November 16, 2016 in Los Angeles, California. The Grizzlies won 111-107.

The 7-foot Spanish center– who is in his ninth NBA season– scored a go-ahead 3 from the left corner with 14 seconds remaining, and the Memphis Grizzlies defeated the Clippers 111-107 in Los Angeles on Wednesday night.

Gasol, 31, scored a season-high 26 points, Mike Conley added 30, and the Grizzlies matched a season high with 15 3-pointers, including a career high-tying seven from Conley.

”They are the best team in the league right now, so for us to get a signature win like this is huge,” Conley said.

Gasol made four 3s, the same number he hit in helping Memphis gain a victory over Washington last month. He’s scored 16 3s this season after hitting just 12 in his first eight seasons.

”We stay in the moment and it’s been good so far,” said Gasol, who also had six assists. ”We made the right plays and we are lucky the ball went in.”

Zach Randolph also came off the bench for Memphis to finish with 18 points and seven rebounds.

J.J. Redick led the Clippers with season-high 29 points, Blake Griffin added 25, and DeAndre Jordan had 14 rebounds for Los Angeles, who still hold the league’s best record at 10-2. Both of their losses have come at home.

”I don’t like that,” Clippers coach Doc Rivers said about the home defeats. ”We had enough points, we didn’t have enough defense.”

Despite the Clippers’ dominance in scoring in the NBA, the Grizzlies gained a 16-point lead in the first half and were up by seven heading into the fourth.

With 23 seconds remaining, Griffin inbounded to Jamal Crawford, who got blocked by Gasol.

After Gasol’s 3-pointer put the Grizzlies up 109-107, Conley stole the ball from Redick and was fouled. Conley then made both free throws to secure the victory.

Jordan blamed himself for not being in the correct spot when Gasol shot from the left wing.

”I made a bad read, saw Mike turn the corner and thought I needed to help,” Jordan said. ”I should have stayed on the corner.”

Vince Carter, who is the NBA’s oldest active player at 39, had 12 points for the Grizzlies.

The Grizzlies will next visit Dallas on Friday to close out a four-game trip. The Clippers, meanwhile, will visit Sacramento on Friday and return home Saturday to host the Chicago Bulls in the second game of a back-to-back, their fourth of the season.

LOS ANGELES, CA – NOVEMBER 16: Marc Gasol #33 of the Memphis Grizzlies celebrates his three point basket for a lead over the LA Clippers during the final seconds of the fourth quarter at Staples Center on November 16, 2016 in Los Angeles, California. The Grizzlies won 111-107.