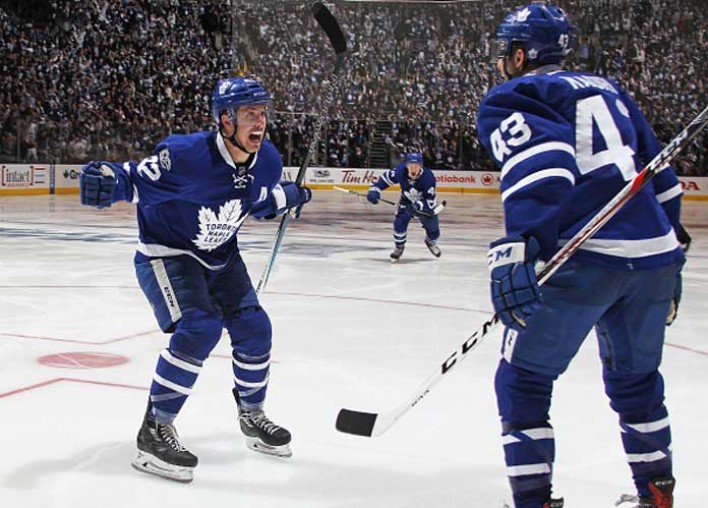 TORONTO, ON - APRIL 17: Tyler Bozak #42 of the Toronto Maple Leafs celebrates his game winning goal in the 1st overtime against the Washington Capitals in Game Three of the Eastern Conference Quarterfinals during the 2017 NHL Stanley Cup Playoffs at the Air Canada Centre on April 17, 2017 in Toronto, Ontario, Canada. The Maple Leafs defeated the Capitals 4-3 in overtime and take a 2-1 series lead.(Photo by Claus Andersen/Getty Images)

The Toronto Maple Leafs defeated the Boston Bruins 3-1 at home in Game 6 of their first-round playoff series on Monday night to force a Game 7, but before doing so they took a moment to honor the victims of a tragedy in the city.

The Leafs held a moment of silence out of respect for the 10 people who were killed and 15 others who were injured after a van plowed into a crowd on a busy street in Toronto on Monday. The suspect, a 25-year-old man named Alek Minassian from a suburb of Toronto, was arrested and charged with murder.

“On behalf of myself and my teammates, we’d like to send our deepest thoughts and sorrow to all the victims and the families, and the brave men and women first on the scene who do so much to keep everybody safe, thank you so much,” he said, per ESPN. “Hold your loved ones tight. Give them an extra kiss ’cause I know I will, ’cause you just never know anymore.”

After the few seconds of silence, Canada’s National Anthem was sung, and the crowd joined in for the emotional moment:

Several other Toronto sports teams, including the Blue Jays of MLB and the Raptors of the NBA, also voiced their condolences and support to the victims of the attack.

Our hearts go out to everyone involved in today’s tragic incident. This is our city and our home. Today we stand together 🇨🇦 pic.twitter.com/xg1fFVjNkZ

We stand with Toronto in sending our heartfelt condolences to those affected in today’s tragic event at Yonge and Finch. 💙

Bruins center Patrice Bergeron said Boston also supported Toronto during this difficult time. Bergeron said he remembers what the feeling was like in his team’s city after the Boston Marathon bombings in 2013. Two weeks after that attack, the Bruins and Maple Leafs faced off in the first round of the playoffs.

“I can guarantee you, the city of Boston is behind the city of Toronto right now,” said Bergeron, per ESPN. “Unfortunately, Boston’s been through it in 2013 and same thing with my teammates. So my thoughts and prayers go out to everyone affected by this.”

“We’re fortunate to live in such a fantastic city with great first responders, and the work they’ve done,” Babcock said after Monday’s game. “But it’s so important that we rally around these people, help out and do whatever we can. We have a fantastic city. We can’t let this get in the way of what we’ve got going. Tragic to say the least.”

Game 7 will be played in Boston at 7:30pm EST on Wednesday.