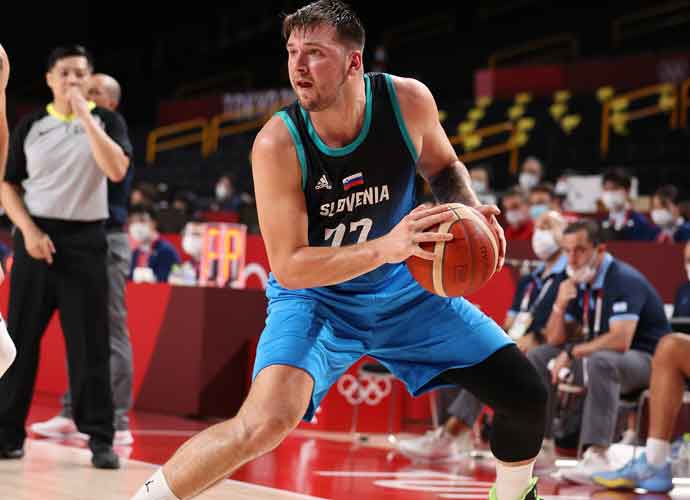 SAITAMA, JAPAN - JULY 26: Luka Doncic #77 of Team Slovenia is drops back to shoot a three point basket against Argentina during the second half on day three of the Tokyo 2020 Olympic Games at Saitama Super Arena on July 26, 2021 in Saitama, Japan. (Photo by Gregory Shamus/Getty Images)

In the first half of the game, Doncic scored 31 points, putting him on pace to break the Olympic record of 55 points in a game set by Oscar Schmidt in 1988. Doncic stayed in for much of the second half but with such a comfortable lead, the Slovenian took on a lesser role as his team increased the scoring margin. Doncic checked out of the game with plenty of time left on the clock, clearly indicating that he was not interested in breaking the record.

“I don’t care about records,” he said. “We got a win and that’s what we came here for.”

“Everybody was telling him on the bench, ‘OK, let’s get the record,'” said Zoran Dragic, a Slovenian teammate. “But that’s not the case. The case is to win the game. He knows that, and it’s crazy that he’s only 22 years old.”

Slovenia, who did not earn a spot in the Olympics until earlier in July, is now a medal contender due to the presence of Doncic.

Doncic played his usual style consisting of incredible step-back jumpers, threes from the logo and a remarkable ability to attack and finish at the rim. Argentina legend Manu Ginobli was impressed by the performance and referred to Doncic as a “beast” and said he had “tremendous mastery of the game.”

The Slovenian side has been a team on the rise, earning their Olympic spot by winning an Olympic qualifying tournament. Slovenia topped Lithuania in the final with the help of Doncic, who began playing for his country immediately after the Mavericks’ NBA postseason elimination.