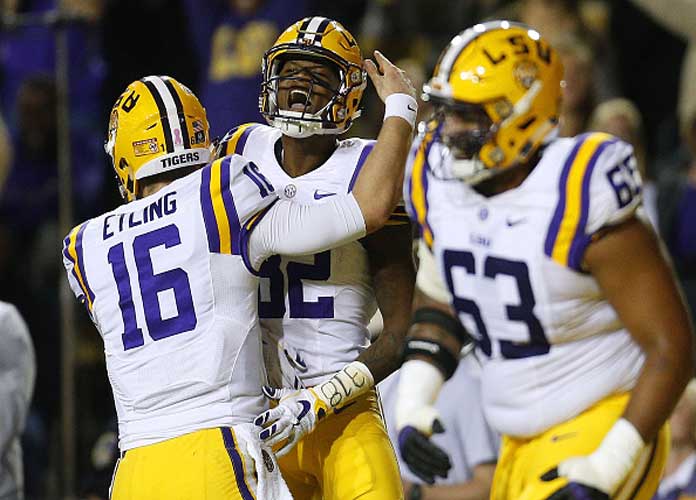 BATON ROUGE, LA - OCTOBER 22: D.J. Chark #82 of the LSU Tigers celebrates a touchdown with Danny Etling #16 during the first half of a game against the Mississippi Rebels at Tiger Stadium on October 22, 2016 in Baton Rouge, Louisiana. (Photo by Jonathan Bachman/Getty Images)

The LSU Tigers have a brand new offensive coordinator.

LSU coach Ed Orgeron was originally interested in Kiffin joining his staff, but wasted no time after the offensive coordinator chose Florida.

“We have a real opportunity under Coach Orgeron to propel LSU football to another level,” Canada said in a statement. “The chance to put together a high-powered offense with the athletic ability available at LSU and the leadership of Coach O is incredibly exciting.”

Canada, 44, does not have the same national name recognition as Kiffin, who has served as a head coach in the NFL, as well as at Southern California and Tennessee. However, Canada’s Pittsburgh Panthers offense has been virtually just as productive this season as the one Kiffin led at top-ranked Alabama.

Furthermore, Canada was the only offensive coordinator to make the finalists cut this season for the Broyles Award, which honors the nation’s top assistant coach.

The Panthers have compiled the highest season point total in program history (508). They will next face the Northwestern Wildcats at the Pinstripe Bowl in New York on Dec. 28. The Panthers are averaging 42.3 points per game (10th in FBS), which would eclipse the all-time Pitt record of 40.7 set in 1904. They also improved their scoring output by over 14 points per game from last year.

Canada replaces Steve Ensminger, who took over playcaling duties after Les Miles was fired and Orgeron was named interim coach in September. The interim tag has subsequently been removed from his title.

The Tigers had just one quarterback — Jordan Jefferson with 450 yards in 2010 — rush for at least 300 yards in a season under Miles.

LSU starter Danny Etling has just 44 rushing yards this season, although the Purdue transfer is more of a pocket passer than a running QB. The other three quarterbacks on the Tigers’ roster– Brandon Harris, Justin McMillan and Lindsey Scott– were all dual-threat prospects in high school. Orgeron’s staff may also attempt to persuade 2017 dual-threat prospect Lowell Narcisse to rejoin LSU’s recruiting class after he recently wavered on his commitment.

Canada’s offenses– if you include his work at NC State last year– have scored 11 touchdowns in the past two meetings against very talented Clemson defenses.

Canada’s quarterbacks have averaged 392.2 rushing yards per season over the past decade — Northern Illinois’ Chandler Harnish was the best of them all with an impressive 1,379 rushing yards in 2011.

BATON ROUGE, LA – OCTOBER 22: D.J. Chark #82 of the LSU Tigers celebrates a touchdown with Danny Etling #16 during the first half of a game against the Mississippi Rebels at Tiger Stadium on October 22, 2016 in Baton Rouge, Louisiana. (Photo by Jonathan Bachman/Getty Images)