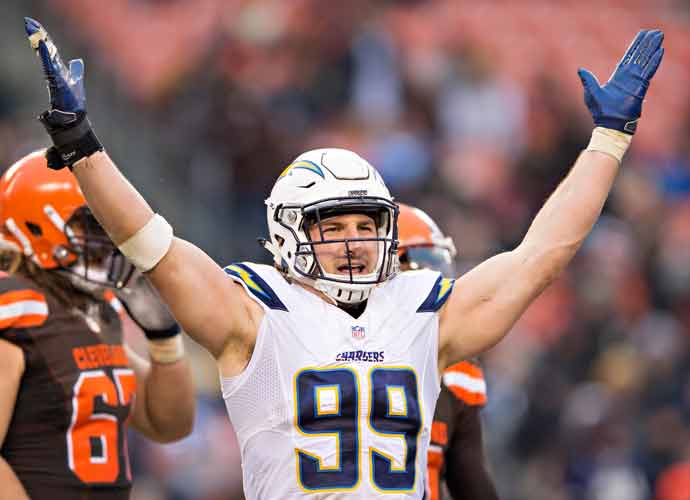 CLEVELAND, OH – DECEMBER 24: Joey Bosa #99 of the San Diego Chargers celebrates after a big play during a game against the Cleveland Browns at FirstEnergy Stadium on December 24, 2016 in Cleveland, Ohio.

Chargers and DE Joey Bosa reached agreement on a 5-year, $135 million extension that ties him to LA the next six years, league sources tell ESPN. He had $78M fully guaranteed at signing and $102M guaranteed – a new NFL defensive record.

This deal comes 13 days after the Cleveland Browns made their pass rusher Myles Garrett the richest in the league at his position which, as is the case in most NFL free agencies, set the market for a star pass rusher and was likely the leverage that Bosa needed to get to a price that he wanted. Of the $135 million, $102 million is guaranteed. Bosa recorded 47 solo tackles and 11.5 sacks last season making him a destructive force on the line. While this was a no-brainer for the Chargers, the timing is interesting with so much of the upcoming season and the NFL’s financial future in doubt, this feels like it was a great time for Bosa to get his money – but maybe not the best time for the Chargers to give it to him. What this does do, with so many players opting out of the restart, this all but guarantees that if there is an NFL season in 2020 that we will be seeing Bosa suiting up for LA.