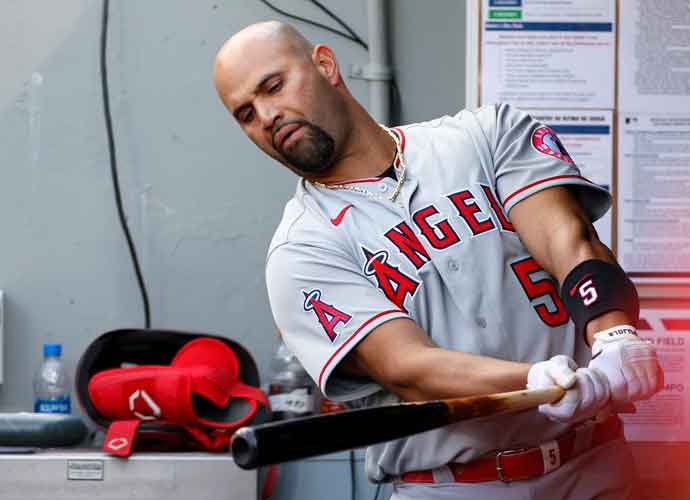 SEATTLE, WASHINGTON - MAY 02: Albert Pujols #5 of the Los Angeles Angels swings his bat in the dugout during the game against the Seattle Mariners at T-Mobile Park on May 02, 2021 in Seattle, Washington. (Photo by Steph Chambers/Getty Images)

Albert Pujols’ tenure with the Los Angeles Angels has ended. The Angels confirmed on Thursday that they are going to be releasing Pujols.

The Angels announced that Pujols has been designated for assignment. Designating a player for assignment means that they are being removed from the roster. It is a prelude to his eventual release from the team.

The #Angels announced today that the Club has designated Albert Pujols for assignment. pic.twitter.com/SCRz78kXcf

The announcement was followed up by a statement by Angels owner Arte Moreno, who praised Pujols for his accomplishments. “The Angels Organization proudly signed Albert Pujols in 2011 and is honored that he has worn an Angels jersey for nearly half of his Hall-of-Fame career,” Moreno said. “Albert’s historical accomplishments, both on and off the field, serve as an inspiration to athletes everywhere, and his actions define what it means to be a true Superstar.”

The 41-year-old designated hitter was in his final year of the 10-year, $253 million contract that enticed him to leave the St. Louis Cardinals for the Angels. From the start of his career with the Angels, he showed a steady decline compared to his batting dominance with the Cardinals during the early years of his career.

Drafted in 2001 by the Cardinals, Pujols won the NL Rookie of The Year award and was named an All-Star in his first season with the team. The slugger finished his rookie season with a .329 batting average, 37 home runs and 130 RBI’s. Pujols’ rookie season sent a message to the rest of the league about what was to come from the then-rookie. Over the next decade, Pujols became one of the greatest hitters of all time. Up until his final season with the Cardinals, he always hit above .300 from the plate.

Pujols left the Cardinals with a .328 batting average. In 2011, he signed with the Angels on a 10-year, $253 million contract. Pujols’ talents slowly declined during his time with the Angels.

Pujols is very likely to be a first-ballot Hall of Famer should he retire. However, Angels manager Joe Maddon says Pujols is still determined to play first base regularly for another team after he clears waivers. “He wants to play, and he wants to be in the field,” Maddon said. “Hopefully he’s going to get that opportunity somewhere else, and believe me, we’re all going to be rooting for him.”