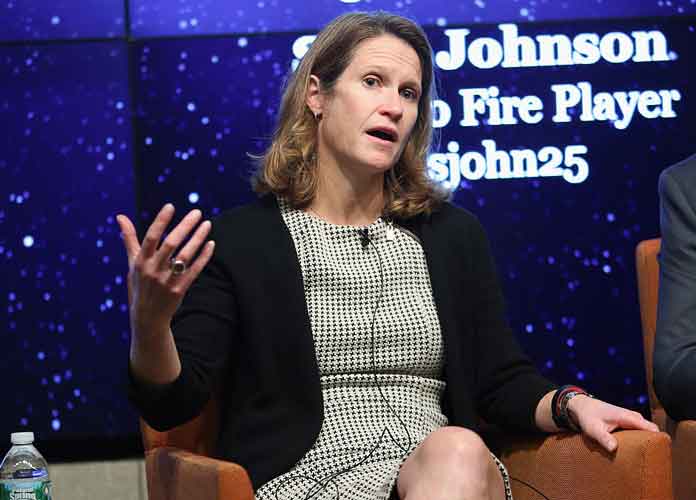 The already crowded race for president of the U.S. Soccer Federation now has one more candidate: Kathy Carter.

The president of Soccer United Marketing — MLS’s marketing arm — is also a former NCAA Division I goalkeeper at William & Mary. Carter worked on the organizing committee for the 1994 FIFA World Cup in the United States and then served as the US representative on FIFA’s Committee for Women’s Football and the FIFA Women’s World Cup.

Current U.S. Soccer President Sunil Gulati — whose term expires in March — said Monday that he would not run for a fourth term. The Indian national has been in charge of the Federation since 2006, and was heavily criticized following the U.S. Men’s National Team’s 2-1 loss to Trinidad & Tobago in October and the squad’s subsequent failure to qualify for the 2018 World Cup in Russia.

“The most crucial times are when the most capable leaders need to step up. The United States Soccer Federation is at one of those moments right now,” wrote Carter in a statement on her campaign’s website.

“We need new leadership that understands both the business operations and the game. Our growth and advancement as a sport require excellence at every level — from our youth and adult programs to our professional leagues to our national teams.”

“I don’t believe that any other candidate has the unique skill set that I do,” Carter said. She added: “I’ve got 25 years of walking the hallways with soccer as my business. This is not about anybody else. This is about me being the most qualified person to lead the federation into the next generation.”

Carter, who is also a former MLS vice president, has reportedly taken a leave of absence from her position at SUM to pursue the unpaid U.S. Soccer President post.

Read my open letter to #USSF members, coaches, players, and fans to hear why I’m the most qualified candidate running for the President of @ussoccer, and what I think we can achieve together: https://t.co/goq4gBUGkB

The candidates are all seeking varying degrees of change within American soccer.

Martino, who is now an analyst for NBC Sports, is crowd-funding his campaign. Wynalda has embraced the notion of introducing promotion and relegation to the sport.

“The position of president is not the C.E.O.,” Carter said, “and I think it’s an important distinction.”

Carter is running on a platform that includes soliciting opinions rather than imposing hers, seeking ways to make American soccer more inclusive, and developing more generations of players — both male and female — who can return the U.S. to the World Cup cycle after cycle.

Carter does not have the three nominations she needs to run — they are due by Dec. 12 — but “I’m starting to do that.”

US Soccer will hold its presidential election at its annual general meeting in Orlando in February.